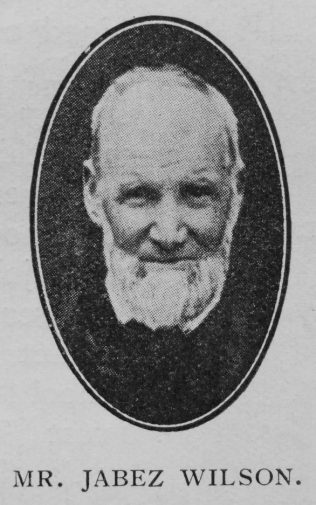 Transcription of obituary published in the Primitive Methodist Magazine by F.E.T.

On Easter Monday, 1911, Mr. Jabez Wilson, of Bourne Church, Leeds First Circuit, passed away. Born at Thwaite Gate, Leeds, April 4th, 1827, he had reached the ripe age of eighty-four years. More than forty years a member of our Church, over fifty years ago he and his late wife made a home for the preacher at Allerton Bywater.

Our brother was a man of genuine goodness, with a simple, yet earnest devotion. Up to within a few months of his death he was most regular and punctual in his attendance at the means of grace. In the prayer-meeting he talked with God as though face to face, and some of his expressions were most quaint. As a trustee, he made sacrifices for Bourne during its financial struggles, for he was generous-hearted and liberal beyond his means.

Jabez was born on 4 April 1827 at Thwaite Gate, Leeds, Yorkshire, to parents William Wilson, a miner, and Ann Ratcliff. He was baptised on 20 July 1828 at Rothwell, Yorkshire.

Jabez died on 16 April 1911 at Leeds, Yorkshire. he was buried at Beckett Street Cemetery, Leeds.