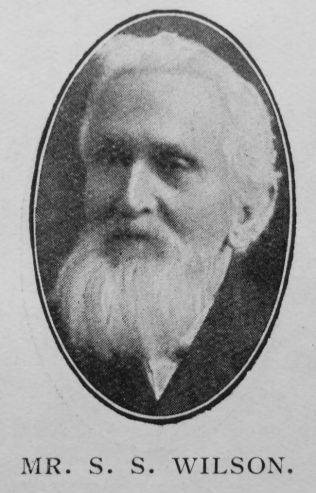 Transcription of obituary published in the Primitive Methodist Magazine by G.T. Chappell

On the 21st December, 1909, there passed away one of the old Hull Primitive Methodists, in the person of Mr. Samuel Smith Wilson. In early manhood he was brought into membership with our Church and became a local preacher. In these early days of difficulty and struggle and triumph of our Church in Hull, he nobly bore his part. To the last to talk of his early contemporaries and their holy toil would brighten his eye and bring glow to his heart.

About 1849 Mr. Wilson went out to Australia and settled at Geelong. And for over ten years he did pioneer work as a local preacher.

In 1860 he returned to Hull to take over his father’s business. At first he joined the Great Thornton Street Society, and later transferred to the Jubilee Church, and about forty years ago associated himself with the Society at Clowes. Here he took a high place in the life of the Church. Possessing a strong personality, a fine appearance, a good voice and considerable mental equipment, he was in great demand as a preacher. The chief pulpits of our Church in Hull and District were open to him.

He has held most offices in our Church: Class Leader, Trustee, Society Steward, and Circuit Steward. Although in later years he had to cease from active labour, his great service in the days of his vigour are an abiding memory. With increasing years he came to reside with his son in East Hull and joined the Bethesda Church, but was unable to attend its services. Confined for the most part to his room he calmly waited the end. His faith continued bright and cheerful. The “Home Call” was welcome. We laid him to rest in his 81st year in the Spring Bank Cemetery, made sacred as the resting-place of many of our Church’s saints.

Rest from thy labours, rest,
Soul of the just set free;
Blest be thy memory, and blest
Thy bright example be.