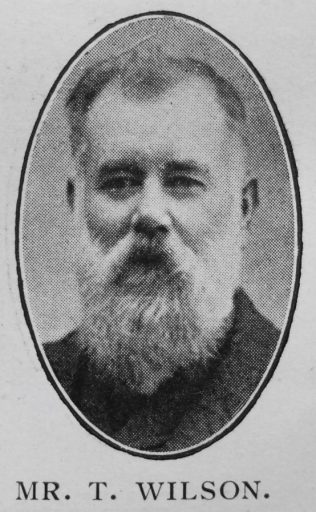 Mr. Thomas Wilson began his earthly course in the village of Haughton, Yorkhire, 7th of September, 1846, and closed it somewhat suddenly at Brandon, in Suffolk, on the 25th of March, 1910, in the sixty-third year of his age.

About thirty years ago he sought and found salvation in our chapel at Selby. There he first became a member of our Church, and some time after began to serve as a local preacher, which work he continued to do with much credit to himself and real profit to others as long as health and strength would permit. Thirty years ago he came to Brandon, first connecting himself with people at Town Street, and afterwards at George Street. In each case he rendered good service, both in a spiritual and social sense.

For ten years, however, before his death he suffered from a painful internal complaint, which often  prevented him from attending the means of grace, and from taking his wonted amount of preaching work. Still, he always kept a close fellowship with Christ, and did what he could to promote the welfare of the Redeemer’s kingdom.

For some years he took the Aldersgate Magazine, and read it with much pleasure and profit.   A very charming and agreeable companion, it was a real joy to have an hour’s conversation with him. He was generous according to his means, and never forgot his quarterly contribution to the Circuit Fund, and sometimes, when not able to get to chapel himself, he sent along his contribution to the collection.

Some months before his death he had a painful seizure, from which he partially recovered, but when doing a little work in his garden on Good Friday he had a second stroke, which quickly terminated his life. May his sorrowing widow, children, and friends meet him again in the land of tearless glory and blessedness.

He married Emma Green, nee Rose (b abt1846) on 1 June 1873 at Aughton, nr. Selby, Yorkshire. Census returns identify one child.

The 1911 census return records that Emma was a certified midwife.

Note: Thomas was born at Aughton, not Haughton as written in the obituary.