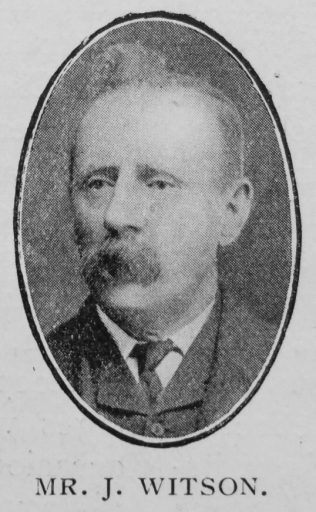 James Witson, a devoted member of the Talbot Road Church, South Shields, passed to his eternal rest Oct. 24th, 1911. He was born at Forest of Dean, Gloucestershire, June 4th, 1859. He was  converted at nineteen years of age; until the end of his days was a loyal Primitive Methodist.

Twenty-five years ago he came to Tyne Dock, associated with the old Fauld Chapel at West Harton, and was an active member and official until it was replaced by the new church at Talbot Road. He worthily filled the office of Sunday School Superintendent, Catechumen Leader and C.E. Official, and for several years was Leader of the Sunday morning Class.

He was a strenuous Church worker, until three years ago, when he met with the accident which ultimately caused his death. He bore the years of his affliction with Christian patience and fortitude. He had a firm grip upon Christ, and often said, “Now we see through a glass darkly, but then face to face.” The funeral service was conducted by Revs. W. Duffield and F. Hobson. The interment took place at Harton Cemetery.

James was born on 4 June 1859 at Blakeney, Forest of Dean, Gloucestershire, to parents George Wilson, a coal miner, and Mary Davies. He was baptised on 10 July 1859 at Blakeney.