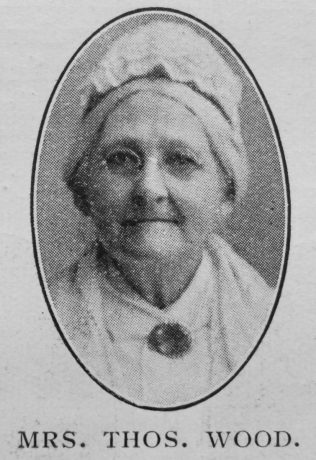 Ann, widow of the late Thomas Wood, died at Shipley, July 25th, 1910, in her 78th year. She made public confession of Christ when 18 years of age, and from that time became an earnest worker in our Church.

Hers was a gracious personality. She was well-informed and intelligent, and to the last deeply interested in everything pertaining to the kingdom of God. Infirmity grew apace during the last two or three years, and much weariness and pain were experienced in the last three months of her life. She was glad to go when the King’s call came.

She has left two sons and four daughters. Both sons are in the Christian ministry, the Rev. Thomas Wood being the superintendent of our Alston Circuit, and the Rev. William Wood holding the pastorate of a Congregational Church at Dundee.

The funeral took place at Charlestown Cemetery on July 27th, and was conducted by the Rev. James Palmer, assisted by the Rev. John Morrison, a former minister of the Circuit.

Ann was born abt1833 at Kirkby Malyzeard, Yorkshire, to mother Hannah.