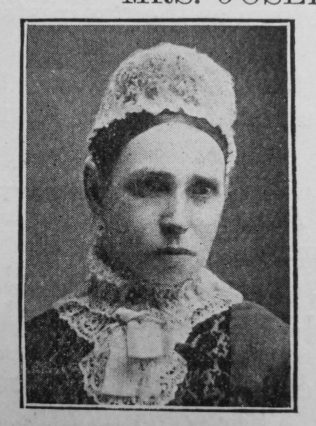 Transcription of Obituary in the Primitive Methodist Magazine by John Bradbury

Few can be more worthy of a permanent record than Henrietta, the wife of our famous Dr. Joseph Wood,  but none would more strongly deprecate any laudatory words. In reverence to her wish much shall be kept silent that might be spoken. Hers was the modesty of high goodness. She always aimed to be hid, but the light of her life was too radiant and she could not be,

Mrs. Wood was the fourth daughter of Mr. John Leonard, merchant of Patrington. She was born on February 22nd, 1832, and entered heaven on December 28th, 1904. In the Clowes Chapel at Hull, on July 11th, 1854, she gave her troth in marriage to the Rev. Joseph Wood. She proved herself a faithful wife and helper in a singularly strenuous and influential ministry. She entered into the trials and joys of ministerial life, and was the source of inspiration to her husband in his work. Home responsibilities became many, and her highly-strung nature must have suffered more than usual. In the circuits where she lived those who knew her saw in her a soul full of spiritual vision and beautiful deeds. During the four years’ life at our Manchester College her strong sense of duty, and the many revelations of a tender and kind heart endeared her to all the students.

What a mother she was; she saved others, herself, she could not save. Always ready to sacrifice that her gifted family might receive the best education, and have the beginnings of success put in their hands – to the last she lived for them – she by her countless sacrifices exalted womanhood and motherhood. “To live, to suffer, and to be forgotten; that is woman’s saga,” says a great poet. That is the summary of her life she would say. But she lived vicariously, and no life thus lived can be forgotten.
“Her place in all the pomp that fills
The circuit of the summer hills,
Is that her grave is green.”

To stand behind the scenes unknown, un-applauded, unseen, was all that she desired. She recognised her husband was the public worker and warrior, but something more than strength is needed to make a complete home and life, the element of tenderness is needed as well as force and she supplied that. Life is not all lived in the pulpit and arena, behind the victories of the market-place lies the fact of the home.

Mrs. Wood recognised this, and made home rich with the intuitions and ministries of love. Our church acknowledges Dr. Wood as one of the greatest preachers she has produced, but she does not know how much she owes to this soul within the veil, who
“Till the last did set herself to man
Like perfect music unto noble words.”

In the closing hours of the old year we laid her body to rest in the Scarthe Cemetery, Grimsby, in the grave where lies Dr. Wood. An impressive service was conducted in the Flottergate Church by Revs. John Bradbury and Henry Fox. A tender and beautiful address was delivered by the Rev. Geo. Bennett, an old colleague. Now she has crossed the bar many feel that by fellowship with this consecrated life they have entertained an angel unawares.

Henrietta was born to parents John and Emma.