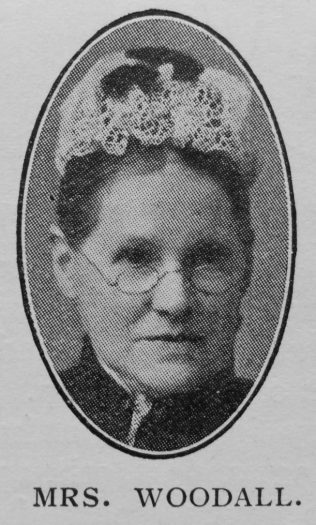 Transcription of obituary published in the Primitive Methodist Magazine by C. Shreeve

Ann, wife of Rev. T. Woodall, of Sheringham, passed away from earth to heaven somewhat suddenly on March 3rd. She was attending to her duties as usual, and was in her accustomed place in the sanctuary on Sunday, February 27th. She was taken ill during the early part of the week following. It was soon discovered that she was suffering from bronchitis and paralysis. All that loving care and medical. skill could do, was done for her, but “God’s finger touched her, and she slept.”

Induced to give herself to Jesus Christ, in a service held in our church in George St., Dudley, in 1857, from that time our sister has been a member of the Connexion. She was a very earnest and devoted Christian worker of a quiet order. Very much interested in the prosperity of the Circuits in which her husband laboured, she worked hard with him in their interests. Very regular in attendance at the services, she was interested in the presence of visitors or strangers, and would make a point of seeing any of the members or hearers who were absent therefrom. A very wise and skilful helpmeet to her husband, like the ideal wife in Proverbs, “she looked well to the ways of her household.” An exceptionally good mother she was anxious about her children’s spiritual, even more than their intellectual and physical, welfare.

The funeral took place on March 8th, and was conducted by Revs. J. Norton and C. Shreeve in the presence of a large and sympathetic congregation. On Sunday, March 12th, a largely attended memorial service was conducted by Rev. J. Norton. Our prayers go up for our bereaved brother and his family. Beside him, three sons and two daughters mourn an irreparable loss. May the God of all grace, comfort and sustain them.

She married Thomas Woodall (1839-1931), a PM minister, in the summer of 1868 at Walsall, Staffordshire. Census returns identify six children.