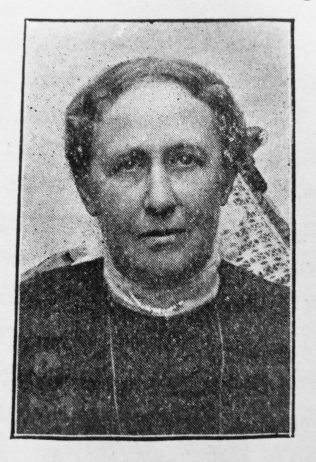 Transcription of Obituary in the Primitive Methodist Magazine by J. Redhead

Mrs. Woodiwiss, of Leyton, was the daughter of Robert and Sarah Blaker, of Poplar, and was born on September 8th, 1849.

When she was but five years of age, both father and mother passed away into the Eternal World, and she was adopted by a friend who took deep interest in her moral and spiritual welfare. She was led to a Free Methodist Church and Sunday School, where she continued until seventeen years of age when she joined the Primitive Methodists in Poplar, and for several years was a useful and devoted Sunday School teacher. Trained amid the influences of a pious home, conversion did not come to her as a great crisis, revolutionising her life, marking a period never to be forgotten, but gradually and imperceptibly like the morning dawn.

She was, however, abundantly conscious the change had taken place. The sun was in the heavens.

In 1869 she was joined in wedlock to William Woodiwiss, the union was a true blending of lives. Mutual love reigned in the home and each was to the other a helper in the divine life. After a time they left London for Beckingham in the Gainsborough Circuit.

Primitive Methodism was at a low ebb in the village and the chapel in a dilapidated condition. But with characteristic devotion and zeal, she with her husband, gave herself to work in its behalf. Her efforts were incessant, and her sunny, genial smile was an inspiration and encouragement to others.

Her home became the home for ministers, and a real home it was. For three years the writer was privileged to share their hospitality, and always found a most kindly and hearty welcome, such as made you feel you were conferring a favour rather than receiving one.

The home was the abode of Christian sunshine and love, and without doubt, largely to this fact we owe it, that amid many discouragements there was no slackening of interest or effort on the part of her husband, and also owing to this largely, both son and daughter are rendering excellent service for Christ and His Church, In their respective spheres.

A few months ago our sister was the subject of a paralytic seizure. Circumstances had somewhat changed in the family life, and it was thought that a return to her native air and also the privilege of being nursed by her daughter, would help to her recovery. Accordingly, as soon as she was able they returned again to London.

For a time the improvement in her health was considerable, nearly every trace of the paralysis disappearing, and hopes began to run high that there were years of life before her. Alas! it was but illusory, unfavourable symptoms again developed. Medical aid was called, and all that faithful and loving nursing could do was done. But no, God designed her for the higher service of heaven, and quietly and gently as the sun in the summer sky, she passed over to the “white robed multitude.”

The minister of the circuit, the Rev. J. Lindley visited her shortly before her decease, and “found her cheerful and resigned to the will of God.”

There was little apprehension that the end was so near, but in about an hour after he left she fell into unconsciousness from which she never woke up in this world.

Mr. Lindley writes of her: “The inﬂuence of her character will abide. To know her was to be made richer.”

She was laid to rest in the City of London Cemetery, on August 9th, the Rev. J. Lindley being the ofﬁciating minister, who also on the following Sunday conducted a memorial service in the Tabernacle, Leyton.

May the God of all Grace comfort the sorrowing ones who now mourn her loss, till the day dawns and the shadows flee away.

She married William Woodiwiss (1848-1928) on 25 December 1869 at Poplar, London. William was a blacksmith, although, whilst they lived at Bromley, the 1881 census describes him as a corn dealer. Census returns identify four children.