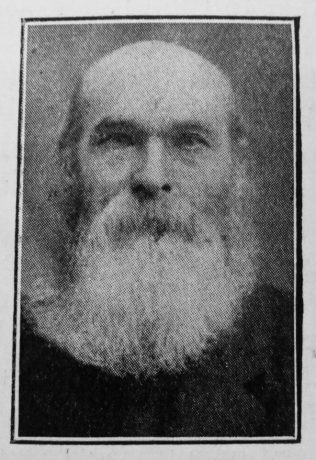 Transcription of Obituary in the Primitive Methodist Magazine by M.T. Pickering

Robert Work was born at Scallaway, Shetlands, in 1826, and on May 4th, 1906, at South Shields, passed home to rest. He was only thirteen years of age when he came to South Shields, pursuing until about thirty years old a seafaring life. When at sea one of his shipmates fell overboard, uttering as he was swept into the sea, the words, “Eternity, eternity! What shall I do in eternity!” Robert Work’s spiritual uncertainty after this incident greatly troubled him, and finally he sought and found his peace with God. He joined our old Glebe Church in Cornwallis Street and commenced a long and honourable Christian life.

About 1858 Haigh Street Church was asking for a new supply of workers. He with others left the strong, vigorous church to give the needed strength to the weaker church. A sturdy, vigorous body of workers laboured month after month, and a flourishing church resulted. The old premises were soon declared inadequate, and in 1874 a new building was erected. Just when bright days seemed ahead dark days came on them. The industries of the neighbourhood ceased, and depopulation resulted. How Robert Work stood by the struggling cause! The grit and character of the man were more manifest in the days of the church’s adversity than in its prosperity. Haigh Street Church is gone, but it and its toilers like Robert Work will ever live. He spent his later years at Baring Street Church.

Robert Work filled many offices in the church. He was for many years a class leader, and for some forty-nine years a local preacher. In his earlier service as a local preacher the journeys were long, but he did not fail. Owing to a seemingly simple accident his leg had to be amputated in 1895, and this prevented him going forth to preach. He was more than a preacher abroad, he was a silent but holy, effective force in his own neighbourhood.

He was laid to rest on Monday, May 7th, 1906, the Rev. M.T. Pickering, Messrs. W.H. Dunn, J. Brack, and John Hunter, took part in the funeral ceremony. At the “In Memoriam ”’ service, held July 8th, 1906, at Baring Street Church, a large congregation of friends assembled to show their love and think of their indebtedness to him. He was a good man, and full of the Holy Ghost and of faith, and much people was added unto the Lord.