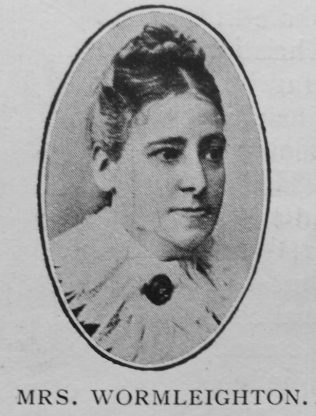 A beautiful life came to a peaceful close March 4th, when Mrs, Wormleighton, of Leicester, went up to the Home of her Saviour, in the 69th year of her pilgrimage. She found Christ in the morning of life, and kept close by his side till “Sunset and Evening Star.’’

On going to Leicester III. Circuit in 1881, I found her an influential member of Curzon Street Church. At that time her late husband had strong sympathy with the masses of poor people. His dear wife was praying and believing that he would soon come into the light of the Lord. In that year I commenced a temperance work at Curzon Street, in which about five hundred signed the pledge, among whom at the close of one Sunday morning’s service was Mr. Joseph Wormleighton. He found the Lord, and became a useful member of Curzon Street Church. His Christian beneficence will never be known in this world. He was the trophy of her (Mrs. Wormleighton’s) holy life and powerful prayers.

In my arduous task of planting the Highfields church, Mrs. Wormleighton and her dear husband were generous helpers. She afterwards united with that church, and continued a very useful member. She was an exemplary mother. ‘‘Her children arise up and call her blessed.’’ In the Passive Resistance movement she was one who “took joyfully the spoiling of her goods.’’ A generous supporter of Christian work and institutions, to the poor she was an unfailing friend. She heeded well the precept divine: ‘‘Let not thy left hand know what thy right hand doeth.” Not only her children and grandchildren, and many needy whom she so constantly and lovingly befriended, but also a large circle of Christian friends feel the poorer for her removal. But her life is a blessed memory. What a welcome she would receive into the Home above !

Elizabeth was born in the summer of 1841 at Leicester, Leicestershire, to parents John Raven, a framework knitter (1851), and Elizabeth Goddard.