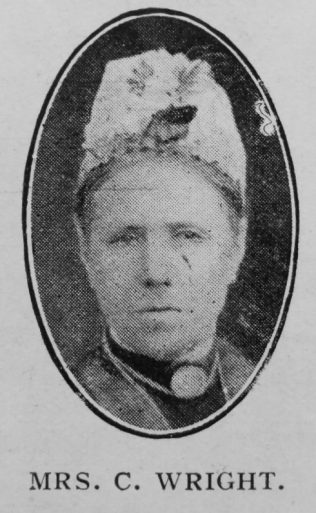 Transcription of obituary published in the Primitive Methodist Magazine by F.S.

Mrs. Cecilia Wright, of Old Walsingham, Norfolk, entered the Homeland on January 18th, 1912, at the ripe age of eighty-two. For upwards of sixty years she was a member of our Walsingham Society, and for many years served as Class Leader.

Her husband, Mr. G. Wright, was a Wesleyan Methodist, but throughout her long life Mrs. Wright remained with us. In her our Church has lost one of its best supporters, and members have to mourn the loss of a kind and sympathetic friend. All who knew her loved her for her unfailing goodness and geniality. A more complete and enthusiastic devotion to the work of God’s Kingdom could hardly be conceived than hers; whilst her enjoyment of the means of grace, and her loyalty to Primitive Methodism were unsurpassed. She had her reward in a saintly character and an imperishable influence for good.

At the time of her marriage Cecilia worked as a dressmaker.