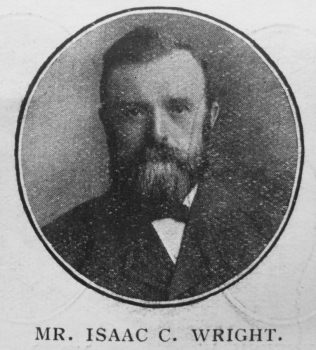 Transcription of obituary published in the Primitive Methodist Magazine by J.N.

The Wells Circuit has suffered considerably by death this last six months but no loss will be felt more keenly than that of Bro. I.C. Wright, who passed away on May 16th, 1910.

He was born at Whissonsett (Norfolk) in 1850, but most of his days were spent in Wells. His father was a local preacher. Bro, Wright joined the church early in life, was put on the plan at the age of 21, and for nearly 40 years faithfully served Christ and the church.

At the time of his death, in addition to being a local preacher, he was also Society Steward, Class Leader and Sunday School Superintendent. He never sought office, but was appointed because of his fitness and faithfulness. His character was truly Christian, and many in the town and neighbourhood have spoken of  his uprightness. The poor will miss him as their generous friend and helper. He was constant in his attendance at the services both on week-nights and Sundays. The ministers have found him a real friend. He gave generously to the cause of Christ, and helped largely in the building of the Wells Chapel.

The funeral service was conducted by Revs. T. Woodall, W.M. Batterbee, and John Norton. About one thousand persons attended to show their respect and esteem for the deceased. About 400 were packed inside the chapel, but a large crowd waited outside. Representatives from each society in the Circuit, together with all the prominent townsmen, were present. A widow and ten sons and daughters mourn his loss.

We thank God for the gift of our brother’s life and service, and pray that many may yet be raised up to carry on the work which he has laid down. On Sunday, May 29th, the Rev. J. Norton preached a memorial sermon to a large congregation.

He rests from his labours, but his works follow him. He was a faithful, devoted servant of the Lord Jesus Christ, and he being dead yet speaketh.

Isaac was born in 1850 at Whissonsett, Norfolk, to parents Samuel isaac Wright, a shepherd (1851), and Sarah Moulton. He was baptised on 5 March 1850 at Swaffham, Norfolk