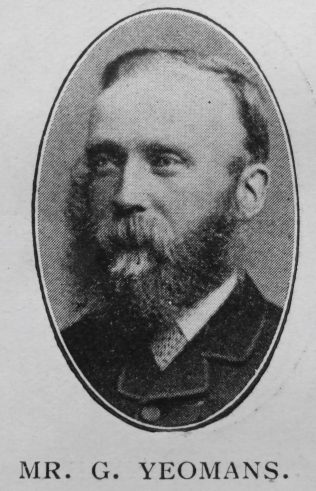 Mr. George Yeomans exchanged mortality for life June 19th, 1910, in the 62nd year of his age. It is over 30 years since he came into the district of Settle (Skipton Circuit), and became identified with our Church in Settle. There were many excellent traits in the character of our brother, which bore unmistakable evidence of his Christian integrity. He loved God’s house. There was no one more gratified to see our new Centenary Church and premises completed and opened for divine worship than Bro. Yeomans.

He was a trustee and wielded a wide influence in its favour. He fully appreciated the means of grace. The class meeting, the prayer meeting, and the preaching service were all sacredly dear to him.

Bro. Yeomans was genial in spirit, kindly in disposition, and always and ever deeply interested in the welfare of the Church. His experience in the class was clear and rich. His prayers were humble, and glowing with devotional fervour. His addresses were plain and practical. the Settle cause has had its cloudy days, but our brother stood by it in its weakness with unflinching fidelity. He was a local preacher, leader, and chapel treasurer for many years.

He had peace and hope under the shadow of death. The night before the Chariot arrived, I talked with him, and read the 23rd Psalm, which he thoroughly endorsed. After 14 days’ illness life was yielded. His remains were laid to rest in the Giggleswick Churchyard; the noble and generous Vicar sharing in the funeral obsequies, with the Revs. J.W. Everingham, R. Wycherley, and J.P. Osborne. On Sunday, July 10th, a memorial service was conducted in our Centenary Church by Mr. Huddershaw, an old friend of the deceased. We pray that the bereaved widow may be sustained by divine grace, and spared to her good work in the Church for many years.

George was born in 1848 at Derby, Derbyshire, to parents William and Amy. He was baptised on 1 October 1848 at Derby Wesleyan Chapel.