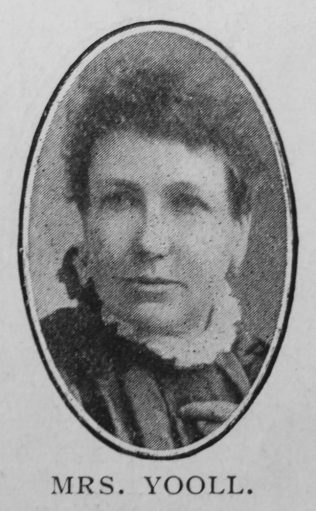 Transcription of obituary published in the Primitive Methodist Magazine by W.R. Hetherington

Mrs. Eliza Yool, wife of the Rev. Henry Yooll, of the Newcastle Third Station, was laid to rest in the Heaton cemetery on Tuesday, June 6th. For nearly two years she was afflicted, but never lost in her suffering that gentle, patient, unselfish spirit which impressed all who met her. It is difficult in a few words to sketch the greatness of her character and the charm of her conduct. To those who knew her Mrs. Yooll will always remain an ideal minister’s wife.

Few men in the ranks of the ministry have been so helped and blessed as her husband. In circuit life she was a tower of strength. Her sympathy, tact, readiness to help those in sorrow or serve those in sickness, enabled her to bind all to her by the closest and tenderest ties. There are many who will always cherish her memory because of what she was to them in the great hour of need.

She was married at Heaton Road in August, 1887, and for nearly twenty-four years was the devoted helpmate of her husband. Together they laboured at Edinburgh, Berwick, North Shields, South Shields (where she began the Ladies’ Missionary Auxiliary), Manchester Fourth, and Newcastle. Mr. Yooll has been honoured by being called to fill two of the most responsible positions in our Church, and while he occupied them he found one by his side who could help him fulfil the onerous duties with great distinction.

Yet, like all truly great women, it was in the home where the strength and sweetness of her nature was so much felt and enjoyed. There she moved mindful of others rather than herself, always diffusing light and peace and joy. That home will always be poorer, and those whom she has left behind will feel unspeakably lonelier because she has been taken from them. But it will only be until the day break and the shadows flee away.

A large company of mourners testified to her influence alike on young and old, rich and poor. Besides many local tributes of loving regard, a beautiful wreath was sent from the ladies of Higher Ardwick, Manchester. The ministers who took part in the service were the Rev. Henry Pratt, Jas. Young, D. McKinley, J.G. Bowran, M.T. Pickering, T. Sellors, Emmerson Phillipson, Wm. A. French, while others present were Revs. H. Davenport, Tom Sykes, A. Lowe, Wm. Glover (Congregational), A. Rathmell (United Methodist), R. Downs (Presbyterian), Wm. Yorwith (Baptist), B. Haddon, Wm. Johnson, etc. We pray for those who mourn and bear them up before Him who alone is able to heal and to help.

Eliza died in June 1911 at Newcastle upon Tyne, Northumberland.