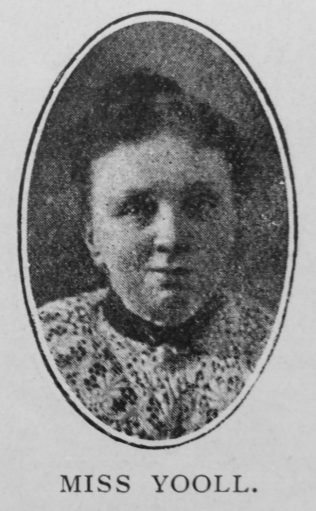 Miss Elizabeth Yooll, the only daughter of the late Rev. H. Yooll, and beloved sister of Rev. Henry Yooll, of Newcastle-on-Tyne, ex-president of the Conference, passed peacefully to her rest on June 18th last, after suffering a long and most painful affliction with great patience and with perfect resignation to the Divine will. In her earlier years she experienced all the vicissitudes that the ministry at that time entailed, and afterwards was the faithful companion and housekeeper of her distinguished brother for twelve years, at Stanley, Glasgow, Wishaw, Newcastle First, Shotley Bridge, and Edinburgh.

After her brother’s marriage Miss Yooll settled with her step-mother in Berwick-on-Tweed, where she remained until within a few months of her decease. In all the circuits she “travelled” our sister was held in the highest esteem, and was ever ready to render help in the Sunday School and in other ways possible to her. She ever sought to follow the example of her sainted father, whom she dearly loved, and whose memory she cherished with most affectionate regard.

During Miss Yooll’s residence in Berwick she took a lively interest in the Church and in the general work of the Circuit, and took part in their activities as far as she could. Our sister was quiet, kindly, and genuine, and had a sense of humour which was often in evidence in the midst of her severest sufferings. These she bore most bravely and in perfect submission to the will of the Heavenly Father up to the very last. Although dying in Newcastle-on-Tyne, her remains, by her own express wish were laid in the grave at Berwick-on-Tweed, June 20th. The many friends attending the last sad funeral rites attested the esteem in which our sister was held.

“Blessed are the dead which die in the Lord.’

Elizabeth died on 18 June 1911 at Newcastle upon Tyne, Northumberland..