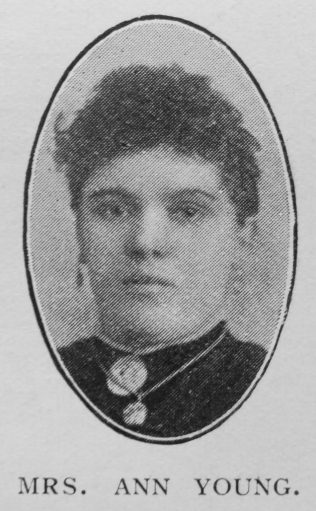 Transcription of obituary published in the Primitive Methodist Magazine by W. Gelley

Our Church at Haswell has suffered a great loss in the death of Mrs. Ann Young on Feb. 23rd. She was the eldest daughter of Mr. R. Stephenson, and the wife of Mr. J. Young. From her early youth she was devoted to God. Her mother had dedicated her unto the Lord, so that from her earliest days she was closely associated with our Church, as a member of the choir, then in after years as President of the Christian Endeavour. To this latter work she was most devoted.

Her labours of love soon came to an end, with a most painful affliction. She lingered long (about a year). Her sufferings were very great, but never a murmur or an expression of fear passed her lips. It was the writer’s privilege to visit her during her illness, and he saw in her life the sustaining power of heart-felt religion as rarely witnessed before. The funeral service was held in our Haswell Church, Rev. T. Dale and the writer taking part. All hearts were bowed and filled with sorrow for the bereaved father, husband and child.

Ann was born abt1868 at Coxhoe, Co. Durham, to parents Richard Stephenson, a potato merchant (1881), and Margaret Jane Forster.

She married Joseph Young (b1869), a manager in clothing department of Co-operative Store, in late 1895 at Haswell, Co. Durham. Census returns identify one child.