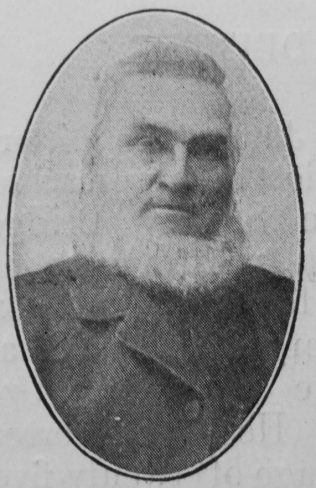 By the decease of Mr. Richard Young, of Montgomery, the  Bishop’s Castle Circuit has lost a venerable local preacher, and our church a most faithful supporter. Mr. Young was born in 1828. When about thirty-four years of age he dedicated himself to Christ in a cottage service conducted by the Rev. Thomas Richards, then not yet in the ministry. About the year 1868, Mr. Young became identified with the Bishop’s Castle Circuit, and though after that date he resided in different places, he retained his connection with the station thence to the day of his death.

As a preacher, Mr. Young was well received in all our pulpits. Oratory was never expected from him, but sound practical teaching was looked for and received. Our friend did not shrink from the arduous conditions of the preacher’s task in those days of wide circuits, and many were the miles that he trudged to proclaim his Master to men. As a man, Mr. Young was widely esteemed. Of a genial disposition, he strove to promote peace and prosperity. His frequent residence away from the circuit centre made it impracticable for him to mingle freely in official life, but it is pleasing to record that a few months before his death, he attended the Quarterly Meeting, and addressed a few cheering words to his brethren, his venerable appearance awakening deep respect.

Our friend ended this life triumphantly on April 29th, 1908, and on the following Saturday, in the presence of a large company, his remains were interred in Churchstoke Churchyard by the side of his wile who had gone before him. Through the kindness of the Rector, the Rev. P.A. Lushington, the desire of the relatives for a Nonconformist funeral (which could not be claimed) was gratified, Rev. W.C. Ball (circuit minister), officiated; Rev. H.T. Rollason (Baptist) also taking part.

On May 17th, an impressive memorial service was held in our Old Churchstoke Chapel, conducted by Mr. E. Lockley, of Bishop’s Castle. To the daughters of the deceased, one of whom is the wife of an esteemed local preacher amongst us, we offer our sympathy and prayers that they may be sustained until the day of reunion.

Richard was born in 1828 at Chirbury, Shropshire, to parents John, a labourer, and Mary. He was baptised on 31 May 1829 at Worthen, Shropshire.