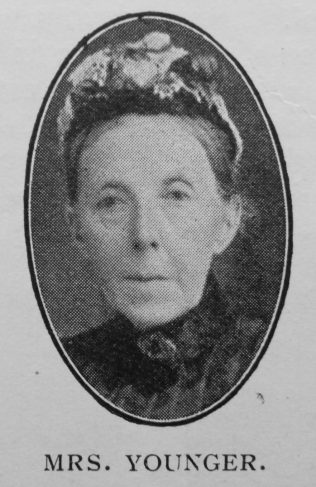 Our Lord Nelson St. Church, Tyne Dock, felt that it had parted with one of its saints, when, on March 2nd, 1910, Mrs. Younger passed to her eternal rest at the ripe age of 77 years.

Mrs. Younger was a winsome character. She was devotedly attached to her Church, and found in its ministrations the truest joy and comfort. Both on the Sabbath and week-day alike, she was an eager listener to the Word of Life. She was dearly devoted to the Class Meeting.

In a quiet manner, but full of spiritual power and sympathy, she would relate her experience of the love of the Divine Father. Her whole soul responded to the sweet influences of the Holy Spirit, and to hear her, and behold her, was to feel and know that she had a genuine and blessed communion with the unseen realities of the Divine Kingdom.

Many will miss her, both in the Church and out of the Church, for in a quiet and gentle ministry she served her Lord. She was one who obeyed the precept, “Let not thy left hand know what thy right hand doeth.” Many have been cheered and helped along the difficult road by her beneficence. Her life was a pattern of meekness and lowliness. Both at home and Church she was an ornament to her Christian profession. She had great concern for the welfare of Zion.

Deeply solicitous about the well-being of her own household, the various members of her family, both at home and abroad, will have cherished memories of “Grandma,” which in the future will be a joy to them, and a stay in the time of trouble.

Her funeral at Harton Churchyard was attended by large numbers of friends, and was conducted by the Rev. F. Hobson; Rev. W. Duffield and Rev. J. Harvey (Congregational minister) also taking part.

Before her marriage Sarah worked as a domestic servant (1851).