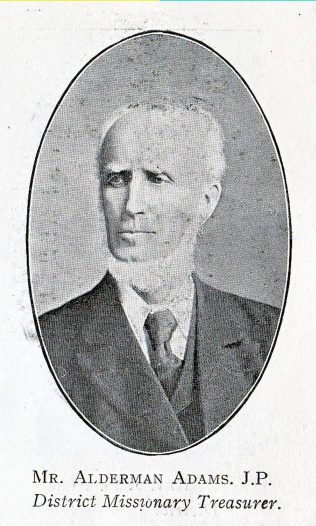 Adam Adams was born at Beccles on 23 September 1834, the son of Adam and Kezia Adams.  He was educated at Wylde’s Grammar School.  A staunch Primitive Methodist, he became a Local Preacher and was then called into the ministry by the Yarmouth Circuit where he was stationed in 1852-4.  However his health at that time was far from good and he did not continue as a Travelling Preacher.  He did, nevertheless, remain on the plan as a Local Preacher.

At Christmas 1859 he married Elizabeth, the daughter of Dunham and Sarah Hoy of Mattishall in Norfolk.  The Adams family consisted of one son and four daughters.  Adam Adams lived near or in Lowestoft for the rest of his life.

A grocer and merchant, he was also the owner of four fishing smacks, one of which sank in the North Sea in June 1884.  A Board of Trade enquiry was followed by an appearance in the Magistrates’ Court when the charge against Adams was ‘that he did unlawfully…send or attempt to send a certain British ship…to sea in such an unseaworthy state that the lives of six persons then being on board the said ship were likely to be thereby endangered.’ [1]  After hearing all the evidence, the magistrates felt that the case was so serious that it should be referred to the Assizes in Norwich.

The case was heard in November 1884.  Adam Adams was acquitted of all charges against him, but reading the verbatim statements in the case, it is hard to understand the decision of the jury.  When Adams arrived back in Lowestoft at the end of the trial, he was met with a huge demonstration of support.

The trial did not hinder his later career.  He was appointed to a number of Council and Education Committees both in Lowestoft and in Suffolk.  By 1912 he was also a Justice of the Peace.  He was Mayor of Lowestoft in 1890-1, 1896-7 and again in 1907-8. [2]   He stood for Parliament in the Horncastle constituency in 1908, but failed to be elected.  He served on many Primitive Methodist Connexional committees and in 1900 was chosen as Vice-President of the Primitive Methodist Conference.

He gave the land for the new chapel at Oulton in 1901 and was subsequently much involved with the District celebrations of the Primitive Methodist centenary.

[2] The Lowestoft News and Advertiser newspaper was notorious for its cartoons lampooning public figures.  Adams sued the paper for libel in 1891.