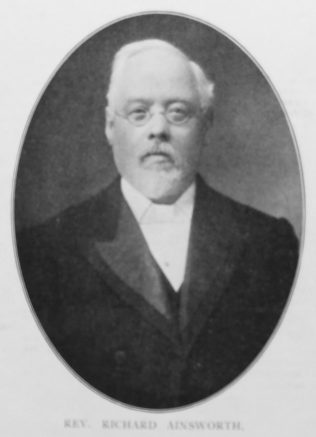 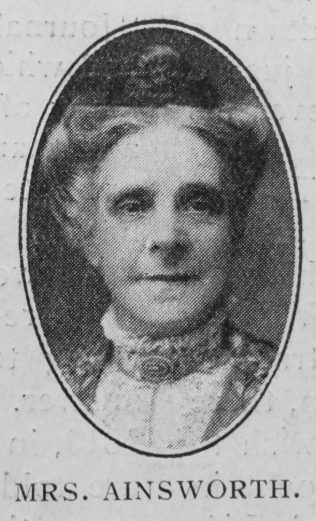 Transcription of Sketch in the Primitive Methodist Magazine, 1913

The Rev. Richard Ainsworth was born in 1849 at Mellor, a small village on the outskirts of Blackburn. His earliest religious associations were with the Wesleyan Church, his parents being members of that body. From earliest days he was surrounded by Christian influences, to which he gratefully ascribes his early spiritual aspirations. Soon after his conversion to God, which took place at the age of fifteen, his parents removed to Rishton in the Blackburn circuit. Here in the immediate neighbourhood of his home the Primitive Methodists had opened a new church. Mr. Ainsworth felt himself drawn to unite with the new Cause. His gifts for service were manifestly developed. He speedily became a Sunday School teacher, class leader and society steward. The new society soon recognised his worth, and in the capacity of local preacher he acquitted himself with such ability and devotion that the call came to the wider sphere of the ministry.

At the request of the General Missionary Committee he supplied a vacancy in the Glasgow circuit. His ministry, which began in 1877, has been spent in the following circuits:- Glastonbury, Plymouth, Torquay, South Molton, Walsall, Sudbury, Skelmersdale, Easingwold, Scotter, Guisboro’, Stoke-on-Trent, and North Cave. In all these circuits he has had a fair share of success. He has toiled cheerfully and faithfully, and has had the joy of leading many to Christ. The churches have been spiritually enriched and considerable material progress has been achieved. In many of his circuits Mr. Ainsworth has done excellent service in organising and carrying out building projects. At Skelmersdale, Guisborough and Stoke-on-Trent he superintended the building of chapels, schools and commodious class-rooms, and by his devoted work and leadership succeeded in raising large sums of money towards the cost.

As a preacher Mr. Ainsworth is deeply spiritual and practical. His sermons indicate that behind the spoken word there is a robust religious experience. Although he has not travelled extensively into the realm of literature, he is well grounded in the theology of Methodism, and is a diligent and prayerful student of the Word of God. He has gone to books as the bee goes to the flower, and the people have relished the sweetness of his message. He has given himself to the visiting of his people, and in his pulpit ministrations has aimed to bring out of the great treasury “things new and old.”

He is a hard worker, giving his very best to his circuits and has been amply repaid in their prosperity and in the high esteem of a large circle of friends. Naturally unobtrusive, he has not been ambitious for official position. He has, however, been delegate to Conference twice, and served the Church by diligent attention to district affairs.

As a brother minister and colleague he is highly esteemed. Old colleagues speak of his nobility of character.

The ministry of Mr. Ainsworth has been greatly enhanced by his excellent wife. In many of the circuits her name is cherished in hallowed memories. By sweetness of disposition, charm of manner, by true companionship, by making the domestic circle a home indeed, she has given effectiveness and power to her husband’s ministry. Although Mr. Ainsworth has passed the meridian of life having completed his thirty-fifth year of useful ministry, he is still vigorous and active, and we wish for him and his wife years of happiness in the sweetness of their domestic life and Church work.

Before entering the ministry Richard worked as a cotton weaver.

He married Mary Jane Heyes (abt1851-1918) in the spring of 1873 in the Blackburn Registration District, Lancashire.

Ainsworth-obit-mins (62 KB Adobe Acrobat document, opens in a new window)
Transcription of obituary in the Minutes of Conference.