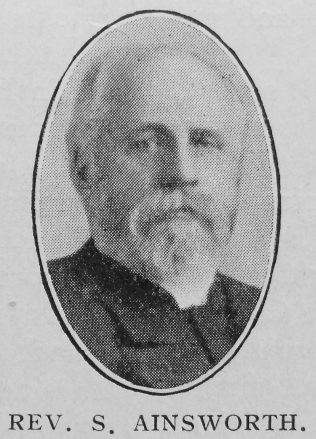 Transcription of Obituary published in the Primitive Methodist Magazine by J.M.J.

In the passing of the Rev. S. Ainsworth, the Primitive Methodist Church has lost one of her most devoted and painstaking ministers. Mr. Ainsworth was born at Kidderminster, December 22nd, 1854. In early life he was a scholar in the Wesleyan Sunday School, in which his father was a teacher. When about fourteen years of age he yielded himself to Christ, largely through the influence of his teacher, who took great interest in him, and occasionally would take the lad home with him to tea. This kindness on the part of the teacher was never forgotten, and young people, especially those away from home, have always found a warm welcome in Mr. Ainsworth’s home. When he was seventeen or eighteen a years of age he removed to Silverdale. Here he joined a Mutual Improvement Class. When his turn came to give a paper his effort won high praise, and it was put to him that he ought to preach. And begin to preach he did, revelling in it, and going wherever and whenever an opportunity was given to him. Removing to Birmingham he came under the influence of the now sainted Dr. Ferguson,  who directed his studies and eventually recommended him for the ministry. In the candidates’ examination in 1877 he won a place on the Reserve List, but was not immediately stationed. In January, 1878, he was sent to Sturminster Newton Circuit, then in the Brinkworth District, as a “supply.” The Conference of that year stationed him there, and after one year’s service he passed to Ramsbury, in the Hungerford Circuit, where two years were. Spent. Thence he removed to Bourton-on-the-Water, at that time a branch of the Witney Circuit. Here he made the acquaintance of Miss Parsons, who later became his wife. This union was most happy, it was ideal, and in all their circuits Mrs. Ainsworth has most unselfishly seconded her husband’s efforts,

In every Circuit he gave himself without stint to the work. No journey was too long for him to undertake, and no congregation was too small to merit attention. He would have a service if only one or two were present, and would go again the next time he was planned. Such fidelity won. His people knew he would be there, and many a weak society has been pulled together and has renewed its youth. That has frequently been his reward. Mr. Ainsworth was a diligent student of the Bible, as his sermons amply proved. In preaching his method was expository; in preparation he took great pains to give his people the best of intellectual and spiritual fare. He read widely and deeply, yet there was no attempt at display. He loved to lead his people in the green pastures and to still waters. Here he himself was refreshed, and he had no liking for any lowering of the ideals of the preacher and shepherd. Mr. Ainsworth was essentially a sociable man, and always welcomed in the homes of his people. He had a playful humour, and the young folk loved him. In a letter of sympathy to Mrs. Ainsworth the choir of Corn Street Church, Witney, recall his “sympathy and encouragement,” and his “gratitude” for the real assistance given by the young people in the work of the Church. That is a typical case. And the writer of this memoir would probably have been in the “far country” to-day but for his patient sympathy and helpful counsel at a most critical period in the writer’s life.

Our friend knew, too, something of the anxieties and joys of money-raising and chapel-building. But everywhere he put “first things first.” This is evidenced in messages that have come to hand from old circuits. In Cwm Circuit, after a lapse of more than twenty years, his memory is cherished and his ministry highly esteemed. In Wallingford “his Christian character and worth as a minister” are gratefully remembered. Basingstoke officials write: “His term upon this circuit is by no means forgotten, nor yet the large part he took towards the erection of the new church.” From Witney Circuit came this testimony: “Tender memories have been revived here since the news of his sudden translation reached us, and throughout the circuit the expression of sympathy has been universal.” A similar testimony was sent from Newport and Cowes, and from Portsmouth I., where a “silent vote of condolence was passed, the congregation standing, at each place on the circuit.” At Canterbury his character as a man and as a Christian minister had already begun to make an impression. Though he seemed at times physically unfit for the task he threw himself into the work with utmost devotion, as the quarterly meeting, held a few days after his decease, records. One of his last sermons on “The Translation of Enoch” was particularly impressive. One young man, replying to a remark anent that discourse, said – and this is suggestive, too – “We have had four or five months of Enoch.”

For years Mr. Ainsworth kept a “prayer list,’’ and a part of each morning was spent in the, “secret place.” That explains much. He had many friends among ministers. The Rev. F. Shergold  writes that for one brief year Mr. Ainsworth and himself were associated as colleagues “with every conceivable feeling of brotherliness and regard.” Rev. A.W. Welford  says: “During the years I have known him the revelation of character has been such as to make me rejoice in having the privilege of intercourse. A man wonderfully equable in temper, restrained and careful in judgment, and most kindly in feeling . . . always concerned for the welfare of Zion. A man who could, without boisterousness, take his stand for right and truth. He delighted in the doctrine of entire sanctification, and in an entire personal dedication to God. He was a good minister of the Word, and his reward is sure. His memory will be treasured by many who rejoiced in having known a good man.” Rev. T. Phelps  writes: “I esteemed him very highly, for I knew something of his real worth, his genuine Christian character, his earnest and conscientious work for the Church, and his loyalty to his friends. . . . He was ready for the Master’s call.’’

Our brother passed home to God somewhat suddenly and unexpectedly as he was returning from an appointment on the 2nd of December, 1913. His mortal remains were laid to rest in the Canterbury Cemetery, on Saturday, December 6th. The service was conducted by Rev. J. Jones, of Watford, who spoke for many in the Brinkworth and Swindon, and Salisbury and Southampton Districts, who could not be present, of the esteem in which the departed was held. An address was given by J. Miles Johnson, the Rev. G. Trusler  (representing the London. II. District), Rev. W.W. Goldstraw  (representing the General Committee and the I.P.F.S.), and Rev. T. Thompson  (representing the circuit), also taking part in the service. At the graveside Rev. F. Shergold offered prayer and Rev. J. Jones read the committal sentences. The choir and friends joined in singing, “Oh think of the home over there” and “We shall meet on that beautiful shore.” A large number of local ministers and friends joined the procession, and were with us at the graveside. On Sunday, December 7th, an impressive memorial service was conducted by Rev. F. Shergold.

We thank God for the influence of our brother’s life, and commend to His loving care and to the prayers of Zion our sister, her daughter, and three sons, who with us wait until we meet again in our Father’s House.

Samuel was born on 22 December 1854 at Kidderminster, Worcestershire, to parents William, a power weaver (1861) and Lydia.

Before entering the ministry, Samuel worked as a factory hand.

He married Mary Lucy Parsons (1862-1941) in the summer of 1883 at Bourton on the Water, Gloucestershire. Census returns identify four children.