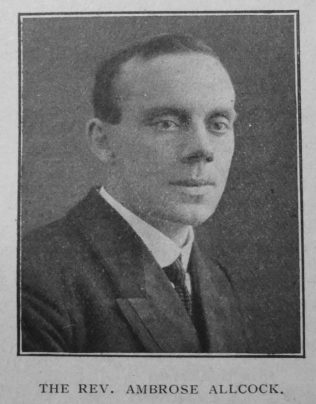 Article in the Primitive Methodist Magazine 1920

In next year’s Aldersgate we are printing the prize story by the Rev. Ambrose Allcock, entitled “The Quest of Andrew Fairbanks.” Our readers will remember that Mr. Allcock succeeded in winning the second prize in the competition. We feel sure that there will be the liveliest interest in reading this splendid tale. Mr. Allcock was brought up in connection with the Broad Street Pendleton Church, Manchester III. Circuit. It was during the ministry of the Rev. E. McLellan that he was given a note for the plan. He acknowledges with gratitude the help Mr. McLellan and the Rev. Harry Ross  gave to him in these most important years of his life. His people at that time were in struggling circumstances and he himself had to work very long hours. He had to prepare for his examinations in the hours from 10 p.m. to 1 a.m., and to sustain a day’s work beginning at 6 a.m. Mr. Ross was his inspirer in this tremendous struggle. He entered college in 1912, and began his ministry at Dartford and Northfleet Circuit. He spent five years at Hinckley, and is now stationed at Melton Mowbray. He won the premier place in the Probationary Examinations, and has distinguished himself now by winning the second prize in the Aldersgate story competition. We anticipate his future with great interest.

Obituary published in the Minutes of Conference

AMBROSE ALLCOCK: born at Sandbach in 1886 was accepted for the ministry in 1914. He was trained at Hartley College and travelled in the following Circuits: Dartford, Hinckley, Melton Mowbray, Darlaston (two terms), Loughborough, Wrexham, Earlstown, Oldham (Lees Road) and Church Gresley. He became a Supernumerary in 1955 and retired to the Melton Mowbray Circuit. To the end of his days he was a keen student, theology being his favourite subject. Bart, Bultmann, Tillich, Bonhoeffer and Niebuhr, he read them all, and alongside such authors would be a John Arlott on cricket or his favourite poet, Wordsworth. He was able to read his Bible in Hebrew and Greek and did so to the end. He made the most of his college training under Dr. A.S. Peake. All his emphasis on reading and learning was to the glory of God. There could be no more humble man than Ambrose Allcock and this somehow came from his knowledge of the greatness of Almighty God; he was distressed at any over-familiarity with his Lord. He had been a keen rugby player and cricketer in his youth and gardening and fishing enthralled him to the end. His masterly mind was revealed in the greatness of his preaching and seldom was a sermon without a quotation from his beloved poets. His whole ministry bore the impress of his strong personality and fine character, revealing his passionate loyalty to his Master. He was outspoken and challenging in his preaching and uncompromising in his denunciation of anything which savoured of hypocrisy. He loved children and was at home in their company; he was a man of great humour and a joy to know. He died on 23rd April, 1972 in the eighty-seventh year of his age and the fifty-eight year of his ministry.