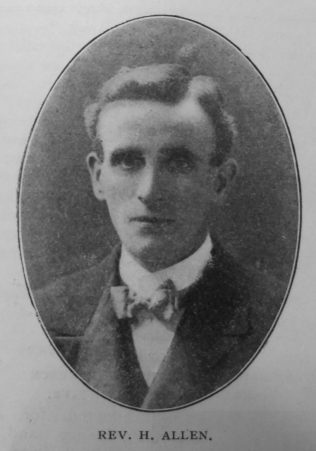 The passing of Herbert Allen has removed from our ranks a brother greatly beloved, and a faithful minister of Jesus Christ, who gave full proof of his Ministry, He was the product of Sheffield Primitive Methodism, and his entrance into the Ministry was hailed with great satisfaction by his many friends and co-workers in the City and District. Very great regret is felt at this early and unexpected loss. He was the son of humble and industrious parents whose interests were supremely spiritual. He always regarded his godly parentage as his greatest heritage. From this grew his early love of Jesus and a great passion for Christian service. In his teens he became an ardent worker in his native Circuit. So manifest were his gifts, graces and fruits that it was generally felt he should prepare himself for the Ministry. The hindrances, both financial and domestic, appeared insurmountable. His mother was now a widow, and he the mainstay of the home. The Circuit Steward, however, generously offered to lend the necessary money, and “Mother” unselfishly insisted that he must answer the call. Thus the way opened for him to enter Hartley College in the year 1906.

No student there ever made better use of his time. So conscientious was he that he denied himself many social pleasures and even necessities, not to mention luxuries, in order that not a penny might be mis-used nor a moment wasted. In addition to putting in full time at lectures and making the most of study hours, he spent his leisure in the splendid College Library availing himself of a privilege which he realized would not again come his way. He gave himself resolutely to the task of obtaining such all-round knowledge as was requisite for his life’s work. The recreation in which he delighted was the reading of classic poetry and fiction. Probably he would have been stronger physically and more popular with the men had he played games, but not so full in mind nor so great of soul. When he began his Ministry in 1908 he was remarkably well equipped in spite of the heavy handicaps of early days because of the full use he had made of the term at Hartley.

He spent the whole of his probation on the Dartford and Northfleet Station. It was here he met the young lady who afterwards became his wife, Miss Mabel Cooke, who has loyally shared with him his Circuit toils and experiences. He subsequently served at Malmesbury, Southampton, Sheffield III., Sleaford, and Leek. On all these Circuits he laboured with great devotion. He quickly adapted himself to each sphere and showed himself to be a capable administrator.

He was a thoughtful preacher who expended much labour in the preparation of his sermons, which were always appropriate and up to date. He had a lofty conception of his work and he never lowered the standard. A man of strong convictions, he declared them fearlessly but always with charity. He could never be betrayed into making unkind references to or about other people. He kept himself singularly free from personal prejudices, and his loyalty both to individuals and Churches was invariable. He scorned idle gossip and knew well the homes where there was poverty and sorrow. He delighted to do good by stealth. The knowledge he had of his people, his unfailing tact in dealing with difficult situations, his genial disposition, combined with a sturdy strength of will, and wise judgment were invaluable qualities. He put his conscience into his work, nothing was left to chance, every duty was done loyally and faithfully. He was content and happy if the work prospered. He has left a worthy record and a gracious memory. The quality that stood out above all others throughout his all-too-brief life was that of genuineness. He was true as steel. His promises were faithfully kept, and his appointments promptly fulfilled. As husband, son, parent, friend, colleague and pastor he was pure gold. He will ever be remembered with kindly affection by all who knew him, as a true Christian gentleman, who was “ faithful unto death.”

The funeral Service was held in our Leek Church, and was largely attended by representatives of the various denominations and all sections of the community. The service was conducted by Rev. J.A. Snaith, who was assisted by Revs. T.R. Auty, B.D., G.E. Rudram, J. Williams, and H. Rhead. Mr. Auty gave the address and referred to his friend as a sincere Christian, a man of fresh mind, earnest in service, possessing a radiant optimism, who died in the fulness of his power.

Much sympathy is felt for Mrs. Allen and her daughter of eight years so early deprived of the one whose life was essential to their happiness and future well-being.

Herbert was born in 1880 at Sheffield, Yorkshire, to parents William Allen, a labourer in an iron foundry, and Ellen Broomhead.

The 1901 census return describes Herbert as a railway engine cleaner.

Herbert married Mabel Cooke in the summer of 1915 at Dartford, Kent.