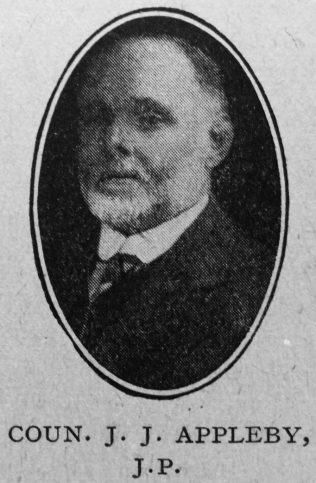 Transcription of Obituary published in the Primitive Methodist Magazine by Mark P. Pearce

With the passing of John J. Appleby a noble spirit has joined the Church invisible. He was a true son of Primitive Methodism and gave his life utterly to her interests. Born at Oldbury September 11th, 1857, his sixty years of strenuous life came to a close on October 9th, 1917.

He joined our Church at Old Hill when he was seventeen years of age. He immediately became a preacher, and was recommended for the ministry three years later. In the Probationers’ Examination he secured the foremost place. After completing his final examination he handed in his resignation. His retirement from the ministry did not diminish his interest in his Church. He married in 1883 Miss Critchlow, of Uttoxeter, who has graciously aided her husband in his life’s work.

In the same year they came to Brierley Hill, where Mr. Appleby rose to a commanding position in the life of the Church and the town. His name will long be associated with his home Church, Hill Street. As Trustee, Leader, Treasurer, and Superintendent of the School he rendered splendid service.

In the wider Church interests of the District and the Connexion he was equally interested and devoted.

In the public bodies to which he was attached he rendered yeoman service. He served on the school board and later was one of the school managers. The Technical Institute in Brierley Hill will remain a monument to his great services on behalf of education. His fellow-townsmen conferred on him all the honours within their power, making him the Chairman of the Council, and later he was made Justice of the Peace for the county of Stafford.

He leaves an only son and widow. Mr. Percy Appleby, M.A., B.Sc., is on the teaching staff of Oxford University.

John was born on 11 September at Oldbury, Worcestershire, to parents James, a mill furnace man (1861), and Sarah.

Note: Many records spell the surname as Applebey.