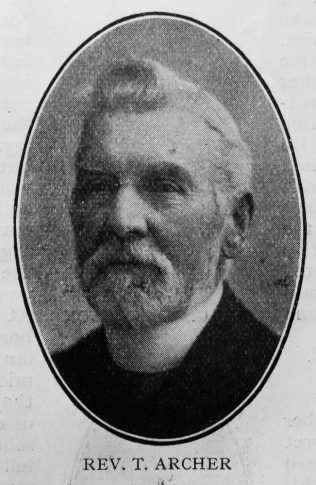 Timothy Archer was born ninety-two years ago at Sculthorpe, a Norfolk village; and seventy-one years have passed since he began his ministry. His probation was spent at Belper where he met Miss Copestake, who became his wife. In the little Derbyshire town his body rests with that of his wife and of his son, Dr. Archer. Seventy years ago, circuits were so large and their demands such that often for a whole week the minister did not sleep in his own home. Travel was done afoot, and the long journeys exacted great physical strain. Timothy Archer, ever an innovator, tried to lessen the fatigue of the road by mounting one of those monstrously high and dangerous bicycles nowadays seen only in museums. In this way he traversed his circuits which were mainly in the eastern and midland counties. He was of the pioneering order of men, ever claiming new territory for the Kingdom. He built several chapels and schools on new ground. It was he who missioned Buxton and obtained the site of the present church. On the Alfreton Circuit he did much “spade work,” which made possible the erection of the magnificent structure – the Watchorn Memorial Church. During

Timothy Archer’s term of ministry, Mr. Watchorn was a youth in the church, and to this day he speaks of his minister as a “forceful preacher.” The forcefulness was not in the pulpit alone, for the Temperance Movement, then far from popular, was strengthened by Timothy Archer’s virile advocacy. But behind all his achievements, and greater than them all, was a character of rare worth.

The Rev. R.W.B. Whiteway writes: “Our church never had a more devoted minister. He was the soul of uprightness, and bore a character absolutely unsullied.” Cheerfulness was natural in him and he freely communicated it to others; he was an excellent raconteurwho kept his listeners in merry mood. Despite his great age, his faculties remained keen and his mind clear to the very end of his earthly life. He never lost contact with modern literature, and was often found absorbed in a recently published book. Undisturbed by ambition, he sought no recognition, and in his serene eventide he was content to reap “the harvest of a quiet life,” and something of life’s morning lingered about him “to make him doubt – t’was night.”

Timothy was born on 6 March 1839 at Sculthorpe, nr Fakenham, Norfolk, to parents Robert Archer, who worked the land, and Ann Battledon.