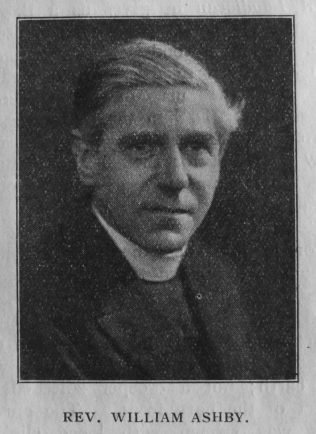 WILLIAM ASHBY: born at Norton, near Malton, Yorks, in 1885. The family moved to Harrogate some nine years later. Leaving school at the earliest possible age, he found work in a bookshop. Believing he was called of God to the work of the Ministry, he set to work to improve his meagre education and began to preach. He was accepted for the Primitive Methodist Ministry in 1909 and was sent to Hartley College. He served his probationary period at Fulham, and after ordination travelled in York, Easingwold, Retford, Keighley, Mexborough, Bradford, Bolton, and Birmingham, going finally to the Anstey Circuit on the outskirts of Leicester. Whilst there, the redivision of the Leicester circuits took place, and for his last year in the active work, he found himself in the Leicester West Circuit. He became a supernumerary there in 1953. On Sundays when he was not preaching, he was to be found in the congregation at Trinity Methodist Church, and greatly enjoyed the worship and fellowship. He always counted it a great privilege to assist at the Communion service and no one could have wished for a more attentive listener. In spite of failing memory he continued to preach to the end. He was of a quiet, retiring personality, with a kindly nature. One could hardly imagine him ever speaking a harsh word or making an unkind remark. His sermons were most carefully prepared and much appreciated. He was a faithful pastor and cared for his people. He had distinct literary gifts, writing a book and contributing to the Primitive Methodist Leader. In a quiet, unobtrusive way, he served his Master faithfully. He passed away on 19 April 1960, at the age of seventy-five and in the forty-eighth year of his ministry.

William authored “How far is it to Bethlehem”, Epworth Press

William was born on 2 March 1885 at Norton, Yorkshire, to parents John, a shoemaker, and Sarah. In 1911 John was a caretaker at the PM chapel in Harrogate, Yorkshire.

In 1901, William was working at Helmsley, Yorkshire as an assistant in a stationary shop.