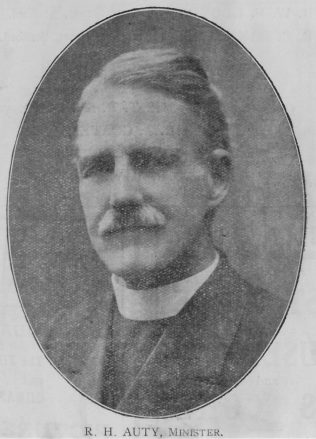 RICHARD HENRY AUTY: born at Dewsbury in 1865, in a family of devoted Primitive Methodists. His early conversion was followed by a clear call to dedicate his life to the work of the Ministry. Gaining experience as a Lay Pastor, he went to Hartley College when he was twenty-one years of age and, later, travelled in northern and Midland Circuits, Like Brother Lawrence, he practised the Presence of God, and this was evident in his life and labour. He was a man of prayer, and loved to carry others to the Throne of Grace; and his preaching was a joy to himself and to his hearers. He was a capable administrator in both Circuit and District appointments, but he excelled in pastoral work. Two of his appointments were a tribute to his kindliness and judgement, in that he was sent to deal with problems of personality and succeeded in reconciling estrangements. In the days of the Passive Resistance Movement he served two terms in prison for conscience’ sake. It would be difficult to imagine a more gracious personality, radiant in worship, generous in appreciation, devoted amid the increasing demands of his home life, and ready for the great adventure. He was active until a few days before his death, which took place on the 3rd March 1949, at Southend-on-Sea, in the eighty-fourth year of his age.

He married Lizzie Johnson (1868-1951 in the summer of 1892 at Hunslet, Yorkshire. Census returns identify two children.