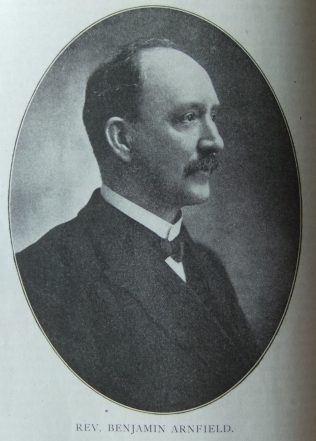 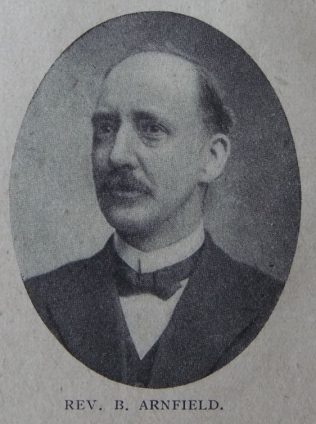 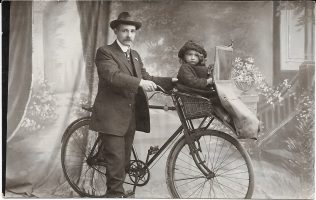 zoom
Benjamin pictured whilst at Alton in the Ramsor Circuit. The child is probably his son Henry.
supplied by Jane Richardson 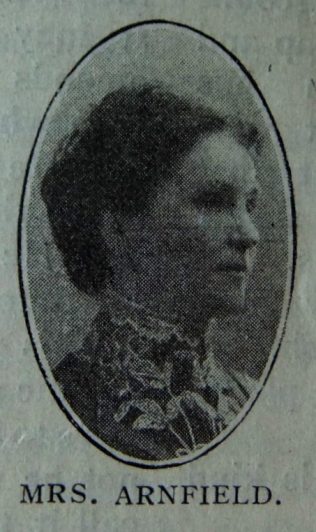 Benjamin was born in 1865 at Mellor, nr Marple, Derbyshire to parents Robert and Esther. His father had departmental charge in a cotton mill owned by Mr Ralph Waller, one of the original deed poll members of Conference.

The removal of the family to Heywood, Lancashire was necessitated in Benjamin’s infancy and he became associated with the Miller Street Sunday School and Church.

Benjamin was educated in elementary school, supplemented by evening studies in technical classes.

Benjamin was converted during the ministry of John Whittle, whose influence was potent and permanent. Benjamin rapidly advanced to positions of Sunday school teacher and local preacher. Recommended for ministry by his home circuit, Benjamin entered Hartley College in 1887.

As a preacher Benjamin proved true to his trend; practical and evangelical, while he was not by any means inattentive to the claims of modern thought and Bible criticism.

Benjamin served as Secretary of the Sheffield District Building Committee.

His obituary records that Benjamin gave his life, and all his life to his Church. He gave it unstintingly and without calculation. His energies, as well as the best of heart and brain that he possessed, were always on the alter, and he never hesitated when the call demanded more than he should have given.

Benjamin died on 13 May 1921 at Leeds, Yorkshire following an operation.