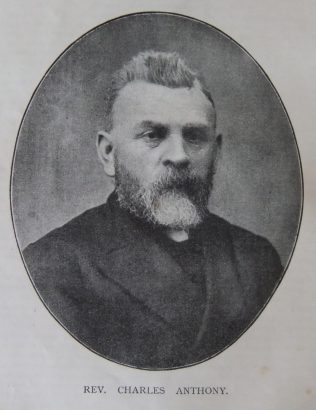 Charles was born on 19 July 1841 at Barton Stacey, Hampshire to parents Edward and Mary. Edward worked the land. Edward was converted through the efforts of George Wallis and William Harvey. He became a local preacher.

Charles was converted at the age of 16.

Charles offered to go to the colonies as a missionary after his parents died. He sailed from London with his wife on 1 May 1875. He landed in Australia at Williamstown and there preached his first sermon in Australia.

Charles was elected President of the annual PM Assembly in Australia and served as Secretary in 1880. He was Editor of the Victorian Primitive Methodist for five years. He spent over ten years as a member of the Probationers Examining Committee.

His sermons were always on evangelical lines, and gave evidence of good preparation; making him acceptable everywhere.

Note: The Australian Methodist Churches came together in 1902. Thereafter the stations and obituaries of previously Primitive Methodist Ministers were not recorded in PM Conference Minutes.