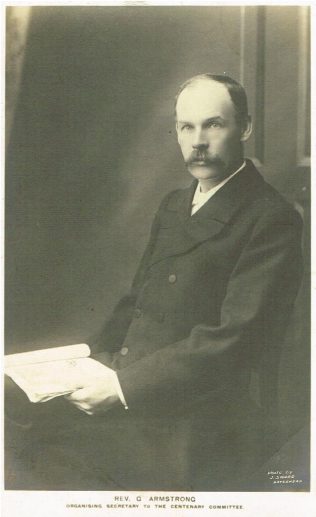 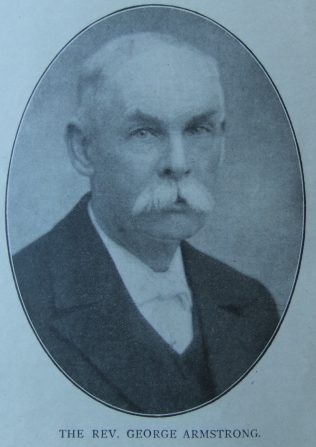 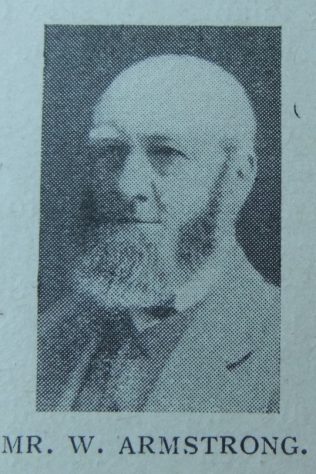 George was born in 1856 at Haltwhistle, Northumberland, the son of William and Margaret Armstrong. The 1871 census records William as a farmer of 420 acres employing one labourer, at Whinshields Farm, Henshaw, Northumberland.  William was also a Primitive Methodist local preacher.

In his parents home a preaching service was held each fortnight, and in his father’s barn a Sunday school was taught, and a missionary meeting held each year.

George was educated at the Dean Raw school at Langley-on-Tyne; a pupil of James Davison, father of Matthew P. Davison. For nine years, George had a business training in Newcastle-on-Tyne and was in membership at Nelson Street Chapel.

George was put on the plan at seventeen years of age. In 1881 he trained at the Sunderland Theological Institute,under William Antliffe.

Apart from five years at York, when George was Secretary of the Centenary Fund, he spent the whole of his ministry in the Sunderland and Newcastle District. His obituary records that his preaching was evangelical, fruitful in winning many for Christ, and in building up of the Church in faith and virtue.

George had gifts of administration in circuit and Connexional affairs. As Secretary of the Centenary Fund of the PM Church, his labours largely contributed to the raising of the sum of £250,000.

George was elected President of Conference in 1923.

The last ten years of his life were marked by increasing physical weakness and infirmity, which was borne with exemplary Christian fortitude.

George married Mary Stainthorpe (b1861) in the summer of 1898 at Hexham, Northumberland.