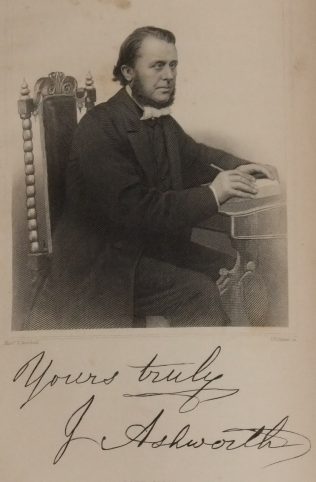 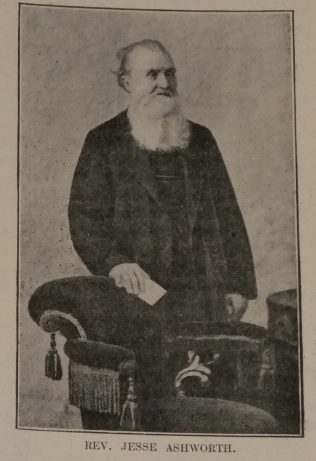 Jesse was born on 30 January 1820 at Stockport, Cheshire. Jesse was aged 9 when he became consiously the subject of divine grace. He began to preach at the age of 14 and before becoming itinerant often preached alongside Hugh Bourne. Advertising bills would announce Hugh Bourne and Jesse Ashworth, the boy preacher.

The Report of the Isle of Man Circuit, March 1840, published in the Primitive Methodist Magazine gives a pen picture of Jesse as follows. ‘Jesse Ashworth, aged 20 years. Single man. Taken out to travel by the Bradwell circuit, 1837, traveled 3 years, travelled in Bradwell, Haslingdon, Burley and Isle of Man circuits. Not capable of superintending, attentive to discipline, diligent in attending to his duties, peaceable man. Ministerial family visitor, preaching generally acceptable, conduct good, successful in bringing souls to Christ, not addicted to long preaching. Proclaims a present free and full salvation through faith in the blood of Christ. useful in this circuit, reads the minutes of the connexion, and tries to make himself acquainted with the business of the circuit, not in debt, no smoker of tobacco.’

When Jesse first visited the town of Gravesend, he found the friends without any place to worship except in the open-air. A very humble building at one end of the town, which had been used as a salting house, was obtained and fixed up for worship. After a year it was relinquished for a larger place in the central part of the town.  After the opening of the new place of worship, Jesse wrote that in the last fifteen months the society in Gravesend had raised £60 for different purposes over and above the quarterly collections and weekly subscriptions towards the support of missionaries. There were 65 members and a hundred Sunday school scholars.

In 1850, Jesse was sent as the only travelling preacher to Chatham where there were 135 members. Petty records that under his prudent management and acceptable and zealous labours the station gradually improved, two additional missionaries were sent to assist him and a number of fresh places were visited with more or less success. Petty also records that Jesse had a successful ministry at Goudhurst and Tunbridge Wells. After about three years of preaching at Tunbridge Wells a neat chapel was erected at a cost of £500, towards which £200 were subscribed.

Whilst at Peterborough, Petty records that great reductions were made in Chapel debts and several new chapels were erected, several new societies were formed and the mission rose into prosperity and strength.

At Croydon Jesse had a great influence on creating a viable circuit. He oversaw the erection of iron chapel buildings at Penge, Sutton and New Wimbledon. Buildings were purchased at Cross Rd, Croydon and Bromley.

In 1890, Jesse undertook a tour of Egypt and Palestine. Afterwards he toured the country speaking about his experiences abroad.

His obituary records that he combined opposites – strength and weakness – unflinching fidelity and gentle charity – uncompromising conviction and noble toleration.

Life of the Venerable Hugh Bourne , 1888

Ashworth the Urbane (645 KB Adobe Acrobat document, opens in a new window)
A sketch published in the Primitive Methodist Magazine, 1905