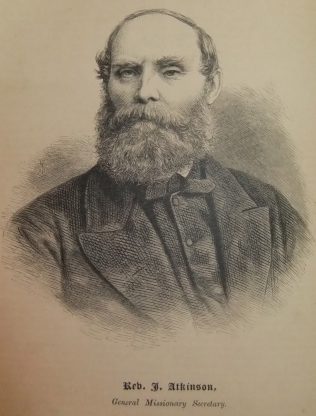 John was born in October 1833 at Kirby Lonsdale, Westmorland. He was orphaned at an early age.

In 1851, John is working as an apprentice bobbin turner in Kendal.

John was converted in 1851. He found in Mr Taylor a foster father, and in John Taylor a life long friend and brother. Following his conversion, John became a successful local preacher in the Kendal Mission of the Barnard Castle circuit.

John’s first superintendent at Shotley Bridge was Moses Lupton. At Wolsingham, he came under the influence of Colin Campbell McKechnie.

John was President of Conference in 1886. He was the first Secretary of the Chapel Aid Association in 1894.

John’s obituary records that he was built on large lines. There was nothing small or weak about him. Frame, voice, mind, will and heart liberally answered to each other.

Stregth and tenderness were the outstanding features of John’s character.