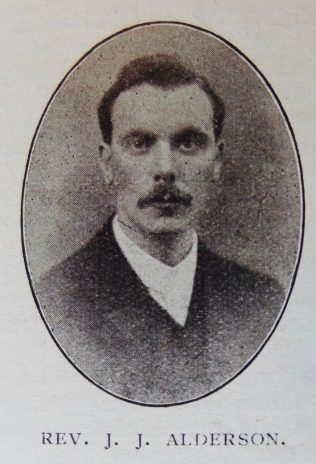 JOHN JOSEPH ALDERSON: born at Gateshead in 1883. After being trained at Hartley College he entered the Ministry in 1906. His circuits were at Cradley Heath, Lincoln, Grimsby, Newcastle-upon-Tyne, Chester-le-Street, Jarrow, Heaton and Wallsend, Bishop Auckland and Ashington. He served the Sunderland and Newcastle District of the former Primitive Methodist Church as Secretary for a number of years and also as District Temperance Secretary. He was a most capable and versatile minister, ever ready to give help and advice whenever he could. After he had retired to live in Gosforth, he willingly came out of retirement to serve actively for two short periods of emergency in the circuit where he had gone to live. Always he showed an ability to manage difficult situations and persons. He was blessed with a robust physical constitution which was matched with a no less robust faith, and to the last he enjoyed a full and busy life. He was an arresting preacher, careful and precise in his choice of words, and the more effective because, as a good and faithful pastor, he knew his congregations intimately. He was a great comforter to those in trouble or anguish, and a great companion to those who enjoyed his good humour and benefited from his sturdy common sense. He became greatly loved and respected wherever he went, and even in retirement his help was often eagerly sought and no less willingly given. He died on 16th June 1961 in the seventy-eighth year of his age and the fifty-fifth of his ministry.

John was born in 1883 at Gateshead, Co. Durham, to parents George and Dorothy. George was an assurance agent (1901).

John was working as an office commercial clerk at the time of the 1901 census.

John died on 16 June 1961 at Gosforth, Newcastle upon Tyne, Northumberland.