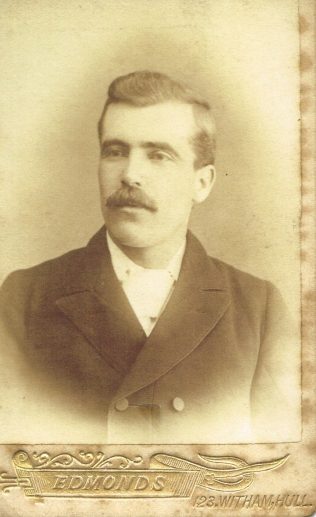 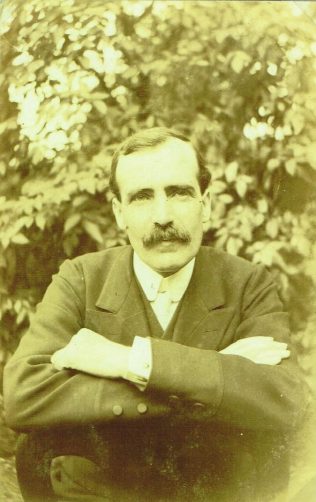 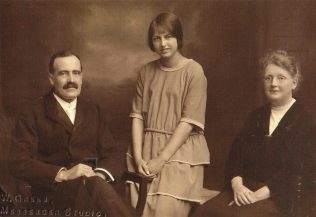 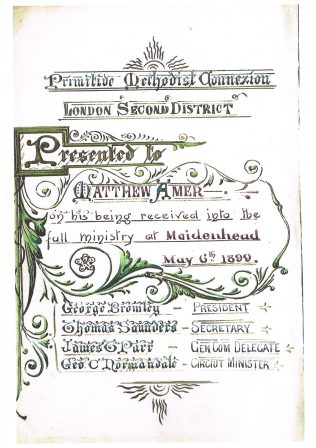 zoom
Inscription in Bible presented to Matthew Amer on his ordination, 1899 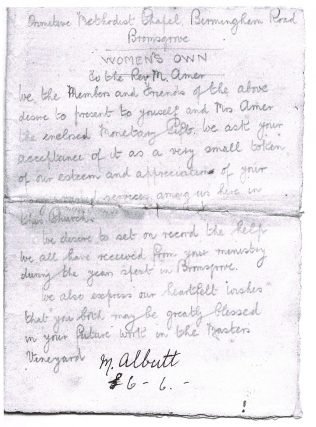 zoom
Presentation from Women's Own, Bromsgrove

Matthew Amer was born on 6 July 1869, in Thornton in Fylde, near Fleetwood, Lancashire. In his early years he was a keen footballer and played for Blackpool. He resisted strong pressure to become a professional footballer, instead feeling called to become a Primitive Methodist minister, but his interest in sport continued throughout his life.

He trained for the ministry at Hartley College from 1893-95, before serving in 14 different circuits.

Bishop of the Tin Cathedral

Matthew Amer served first in Hull, but he was transferred for health reasons to Gillingham, Kent, where he finished his probation. He was the first married minister to take charge of the church, a humble corrugated iron structure, which ministered to the needs of a great variety of people, notably men of the Royal Navy from the base at Chatham. He was lovingly known as ‘The Bishop of the Tin Cathedral’.

From here they moved across the Medway to Gravesend and Northfleet, where they had a very difficult time. There was a smallpox epidemic in London, coupled with typhoid. Some of the cases were isolated on boats in the river and the infection spread. Matthew Amer constantly visited the sick – sometimes he had to bury a whole family together.

He took up his ministry in Knighton, Radnorshire, at a time when the Welsh were afire with the burning spirit of revival. They sang their hymns as they had never sung them before, led by their minister, and often went over the last verse several times.

This was also the time of the Passive Resistance movement, when many Methodists refused to pay their rates in protest against the use of their money to support religious education in church schools.

After his ministry at Market Drayton, Matthew Amer was sent to Brynmawr following a breakdown in his health, from the nervous and physical energy he had expended on his work. After 12 months convalescence he was well enough to spend two years in the Pillowell circuit, before returning to Brynmawr for three years. In 1932 he superannuated after 36 years service to Methodism. He would have continued longer but his health was against him and he retired to Yorkley.

He married Elizabeth Ann Shadbolt on 1 July 1899 at Fleetwood, Lancashire. She was born on 14 September 1869 at Waterbeach in Cambridgeshire, and died at Hillside on 25 September 1959.

They had one daughter, Elizabeth Patience, who married W H James. They were staunch members of Pillowell Methodist Church.

He was ‘a helpful preacher and a faithful pastor, always eager too serve his Lord.’ He was ‘a man of quiet qualities, humble of mind and serene of heart’.

W Leary, Directory of PM Ministers and their Circuits