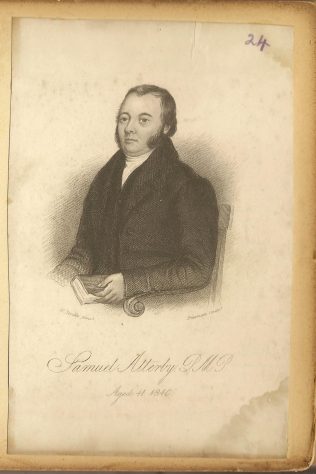 Samuel was born on 20 July 1800 at North Somercotes, Lincolnshire.

Samuel was one of two missionaries expeditiously created by the Nottingham Circuit in response to a request from Mrs Woolhouse for missionaries in Hull. The other was John Hutchinson.

In 1819, he was sent to the Retford Mission. During that mission he suffered imprisonment at Bolsover in Derbyshire and again, eight days later, at Tickhill in Yorkshire. Later that year, the journal of Sampson Turner records that on 10 October Samuel preached with great effect at Belper. The chapel was so full that many could not get in!

Samuel was the preacher at the camp meeting at Mousehold Heath where Elizabeth Bultitude, the last PM Woman Minister, was converted in 1828.

Curry reports the following in relation to Samuel’s time in the Isle of Man.

The first intimation of the coming revival we have from Mr, S. Atterby, who tells us that preparations began in the early autumn of this year (1839) by a whole day of prayer and fasting throughout the whole Circuit, beginning at six o’clock in the morning. This day of prayer was followed by services at each place each evening. ” The cloud of the Divine presence rests upon them,: such power, such prayer, burning zeal, holy love, prevailing faith, and unwearied labours by the Manx brothers and sisters I never before witnessed. Conversions took place throughout the whole Circuit. At Douglas there were fifty-six, and at Castletown fifty more.”

Samuel married Hannah Dent in 1823. She died in 1827. Parish records identify one child.