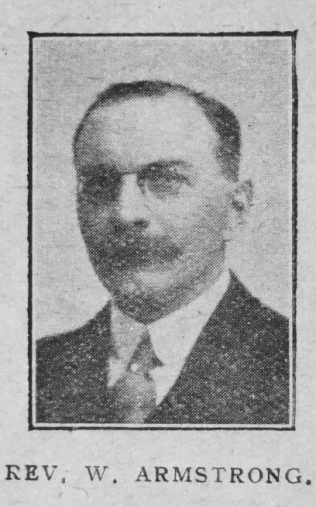 WILLIAM ARMSTRONG: born at Bewcastle near the Scottish border, in Cumberland, in 1883. He was brought up in a devout Methodist home, his father, a farmer, led worship for family and neighbours in the farm kitchen; his uncle, the Rev. George Armstrong, was later President of the Primitive Methodist Conference. Whilst in Driffield, where the family had made a home, William Armstrong offered for the ministry and entered college in 1906. After his ordination he travelled in Penrith, Allendale, Hetton, Mansfield, Kendal, Barrow-in-Furness, Chester-le-Street, and Newcastle upon Tyne (Heaton and Wallsend Circuit) and during his stay in the Lake District served as secretary of the Carlisle District. He was utterly reliable and straightforward and brought to his pastoral duties an understanding of human problems and a sympathy which was deeply appreciated. He loved music and his love for children was shown in his talks to them, prepared with great care, skill and humour. Failing sight necessitated his retirement from the active ministry in 1946. After unsuccessful attempts to restore his sight he accepted total blindness and soon found a new sphere of Christian usefulness in the service of the handicapped. His radiance, sympathy, and concern for people made him a great inspiration to the elderly and incapacitated. He exercised a most gracious ministry, particularly to the blind. His wife was his constant help. He died on 17 April 1967, in the eighty-fifth year of his age and the fifty-eighth of his ministry.

William was born in 1883 at Bewcastle, Cumberland, to parents William and Prudence Eleanor. William, senior, was a farmer and later a land agent. William was a nephew of Rev. George Armstrong.

The 1901 census describes William as a coke manufacturer’s clerk.

William died on 17 April 1967 at Heaton, Newcastle upon Tyne, Northumberland.