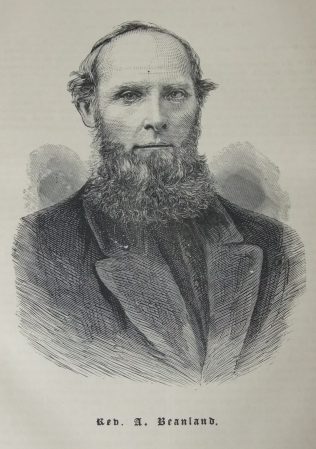 Arthur was born on 9 December 1828 at Great Horton, nr Bradford, Yorkshire to parents Benjamin and Betty. Benjamin was a blacksmith. The 1851 census gives Arthur’s occupation as blacksmith and local preacher.

William Antliff’s ‘Book of Marvels” makes reference to an incident of a donkey in a prayer meeting. This happened in Benjamin’s house.

As a boy Arthur enjoyed constructing mechanical nicknacks. He was converted in his fourteenth year. The writer of his obituary suggests that Arthur was a serious and studious child, even more so after his conversion, and did not take much exercise, which may have affected his health in later years.

Soon after conversion Arthur became a Sunday School teacher. He was a local preacher aged 18 and entered the ministry when 24.

Glances through the gates: or, sketches of paradise , 1873

The world before Adam: or, geological footprints of Jehovah , 1876

Arthur studied geology and was elected a Fellow of the Geological Society on 5 November 1873.

Whilst at Scarborough, Arthur’s health started to deteriorate. After a year at Winterton, Arthur applied for superannuation. Conference did not accept the application and sent Arthur to Kingston-on-Thames where it was felt that a change of climate would help. Sadly his condition deteriorated and he was admitted to hospital where he died as a result of an operation.