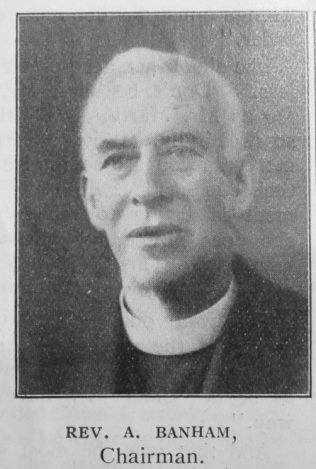 ARTHUR BANHAM: born at Wisbech in 1874. He entered the ministry of the Primitive Methodist Church in 1903 and served in the following circuits: King’s Lynn, Great Yarmouth, Burnley, Chelmsford, Croydon, Hull, Middlesbrough, Plymouth (King Street), and Barton-on-Humber. In 1939 he became a supernumerary and retired to Topsham near Exeter. With the coming of the war a rearrangement of ministers in that circuit was made necessary, and he gladly accepted an invitation to serve again in the full work. He was stationed for almost three years at Exmouth (Tower Street), and finally retired there in 1942.

During his supernumeraryship he gave gladly of his time and strength to the work of preaching in the Exeter circuit. He was a wise and thoughtful preacher and his sermons were enriched by his wide reading and his up-to-date knowledge of men and affairs. His ability as an administrator was shown in his chairmanship of the Plymouth District and in various District secretaryships which he held during his ministry. His character showed forth the grace of God. He stood firm for righteousness and possessed outstandingly the grace of charity. In the homes of his people he bestowed the gifts of friendship and love; he was ever ready to bear another’s burden and always brought men nearer to God.

The end of his life was marked by much pain and suffering, but through it all his courage never faltered, and he never complained. Towards the end he said, ‘Only one thing matters, God’s love for us and ours for Him’. He died peacefully at his home in Exmouth on 31st January 1955, in the eighty-first year of his age and the fifty-second of his ministry.

Arthur was born 20 December 1874 at Elm, nr Wisbech, Cambridgeshire, to parents George, a plate layer, and Esther. He was baptised on 17 January 1875 at Elm.

Before entering the ministry Arthur was a pupil teacher (1891) and outfitter’s manager (1901).