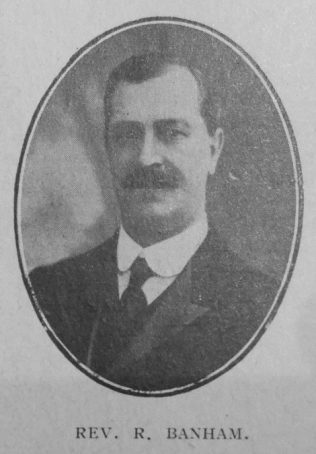 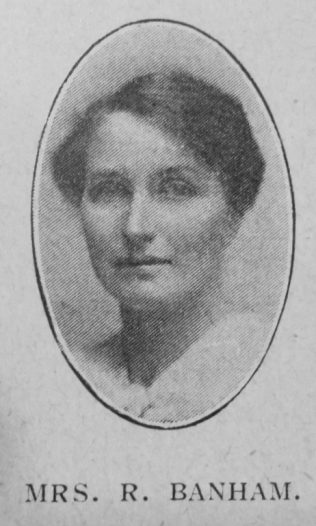 Transcription of obituary published in the Minutes of Conference by Fred W. Dodds

Big men have come from Suffolk to serve our churches, but none bigger or braver than Robert Banham. On January 3rd, 1869, he was born in Barnham, one of a big family whose forbears had dwelt there from time immemorial, The names of family and village are suggestively alike, probably, indeed, once were spelt the same, There at any rate, our brother spent his early life, and there quite recently his father died and was buried.

A sturdy folk – these Barnham people. How Mr. Banham delighted in the tale of the way they wrested a chapel site from an unwilling Duke of Grafton! Something of the adamant of the flint beds which underlie all that West Suffolk is in their nature! And was in Robert Banham, too! A giant in stature, he maintained all the doggedness and determination of his fathers, and was a giant in spirit, too! Education was no great thing in Barnham, but, after conversion, he steadily worked his way to the standard required of our ministry, which he entered in 1895. His quality was early recognised. From then till now he was given small choice in his own way of life. A hopeful Missionary Committee sent him to hopeless Pembroke Dock, and, when he had volunteered for West Africa in 1901, gave him task after task calling for all that stubborn perseverance which he so plentifully possessed.

Term after term he served in Fernando Poo or Nigeria, in the former by special appointment, facing  – and  successfully – as delicate a situation as has ever confronted our Santa Isabel Church, in the latter, with Rev. N, Boocock, launching our first effort at Oron, and himself building the Institute there. A very short interim of English work at York I followed, and again he was in Nigeria, a leading figure in all the developments that have taken place since then. Conditions were altogether different from those of his earlier terms. We had reached out 160 miles from Oron, and already the pressure of an inrushing civilisation was being felt, but he entered with all the adaptability and spirit of a youth. He sat in all our Councils, served in almost every district, helped in all expansion schemes, journeyed with deputations first to the Nara District, and then to Okpotoland, built our second Institute at Uzuakoli, established our footing in Port Harcourt, and finally received the high and well-deserved honour of becoming the first General Superintendent of the Nigerian Field.

But, as in his native Suffolk the flint lies deep and is covered by pleasant fields and smiling pastures, so Robert Banham’s capacity for unswerving loyalty to his conceptions of religion, and policy, and social progress, was not forced too much to the front. There was nothing dour or sharp-angled in his attitude to his fellow-men. There was the flint-like ability and will to stand his ground under any pressure, but above it he was kindliness and brotherliness personified. The most youthful and callow felt at ease in the presence of that scul, generous to the point of benevolence, modest to humility, gracious to meekness, kind-hearted to the utmost sacrifice of self for others. The Africans will perhaps remember this side of him best, especially those of Uzuakoli where mostly he served. To them, as to us all, he was a fatherly presence and Influence, and they came to him, as children, with their minutest troubles, to which he was never too tired to listen. Indeed, this was one of his greatest characteristics, the wonderful patience with which he would unravel the knotted skeins of untoward circumstance, revealing his intense interest in his fellow-men, and his aching desire to be of help.

And what the natives felt of him so did we all, yea, even the stranger within our gates. For he had a peculiar way with Europeans of every kind. Already at Port Harcourt he had begun a ministry to the hundreds of young Scots and Englishmen there, that promised to be fruitful of abundant blessing. In this, as in all his labours, he had the able support of his equally devoted wife, whom, as Miss Sybil Edge of Wolverhampton, he married in his early ministry. Theirs was an ideal life, for each was the complement of the other. Nor did anything rejoice them more than to know that their only daughter, a Bachelor of Science of Leeds University, was on the point of devoting her life to the field they had so graciously served.

Robert Banham died at Port Harcourt of heart failure, on March 17th, 1926, aged fifty-eight, and still a young man in outlook and in heart, and with great schemes for the Kingdom maturing in his mind. His end was very sudden. The Annual Nigerian Synod had been held up country, a time that everyone who was present speaks of as being specially marked for spiritual power and social joy. From this Mr. Banham had returned to Port Harcourt in the best of health and spirits to prepare his documents for the Missionary Committee. After a laborious day on March 16th, he had retired to bed late, and at about eleven o’clock had complained of pains which he attributed to indigestion, from which he occasionally suffered. The pains passed away and, just after twelve recurred with greater force. By half-past twelve they had vanished, and he turned over to sleep. But it was the last, long sleep. For quarter a century  our brother had spent himself in a dark land, and had seen the kindling of a blaze destined to grow and spread until all Nigeria glows with the light of God. It was fitting that he should die on the day of such another man, the worthy St. Patrick of Ireland.

Late in the same day he was buried at Port Harcourt, the ceremony conducted by Revs. G.H. Hanney and E.E. Pritchard, who, by terrific effort had managed to catch the afternoon train down. Others of our missionaries were also able to be present, besides which over ninety Europeans attended at the grave, as one has said, “a wonderful tribute to Daddy’s work in this short time” among the Europeans of Port Harcourt.

Although initially Robert also worked the land, the 1891 census return describes him as a Primitive Methodist evangelist.

He married Sybilla Rachel Edge (1874-1961) in the summer of 1899 in the Wolverhampton registration district, Staffordshire. Records identify one child.