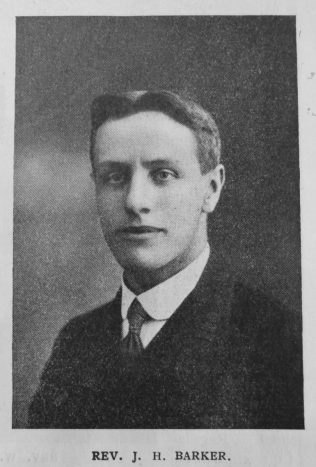 JOSEPH HERBERT BARKER: born in 1885 at Birkenhead. He abandoned the prospects of a successful business career in response to a call to offer for the Primitive Methodist Ministry. After being trained at Hartley College, he spent the whole of his probation at Kennington. Afterwards, at Stoke Newington, Howden, Sheffield, Mexborough, Leicester, Blackburn, Coalville, Mansfield, Wigan, and Chester, he exercised an increasingly fruitful ministry. He retired in 1952 and attached himself to the St. John Street Church, Chester, where his keen participation in the Church’s activities and his constant readiness to help were greatly appreciated.

He was a man of wide reading, deep culture, and many gifts. His business training left a permanent mark upon his ministry, and his administrative gifts were recognised by his appointment in the formative years after union as assistant-secretary to the newly-formed North Lancashire District. He was a keen student who brought to his pulpit ministrations the fruit of a mature mind. In his pastoral work he excelled, and both young and old found it easy to confide in him. Beneath his outward reserve he possessed a warm sympathetic nature which was quick to respond to his people’s needs. He was a saint who was honoured among all the Churches and during the years of his retirement he was an acceptable preacher in the pulpits of all denominations. He took an active interest in the work of the Chester Free Church Council, and a few years ago he occupied its Presidential Chair with distinction. He died on 26 December 1960, in the seventy-fifth year of his age and the fiftieth of his ministry.

Joseph was born on 2 September 1885 at Birkenhead, Cheshire, to parents Joseph, a stonecutter, and Elizabeth.

Joseph worked as a shipping clerk before entering the ministry.