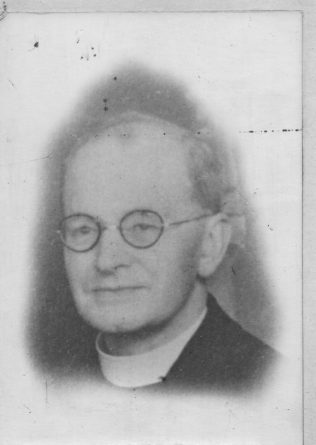 Was born at South Shields in 1882, and at an early age manifested an interest in Church work, particularly in preaching.

One of his earliest sermons was preached at the age of sixteen, in the hospital where he died.

His outstanding gifts were quickly appreciated, and he was sent forward as a candidate for the Primitive Methodist Ministry, and accepted into Hartley College in 1903.

He became a Supernumerary in 1948 and settled in Hebbum, but continued to serve his Church with unabated zeal.

He preached until two or three weeks before his death.

He was always in love with his work, but his greatest joy was in preaching the Gospel of his Lord.

He was a careful administrator, and a good organiser, and his pastoral work made him beloved by all his people.

He prepared his sermons with meticulous care, and his proclamation of the Word was forceful and convincing.

His last sermon was from the text “ He shall not be afraid of evil tidings ; his heart is fixed, trusting in the Lord,” and it might be said to have expressed the faith of his life.

His wife died after a long and distressing illness, but his courage and cheerfulness under affliction were an inspiration.

One of the comforts of his life was his music. An accomplished pianist, he found special delight in Mozart.

A brotherly man, he was equally at home with the aged and the young.
He might have lived longer, had he lived more carefully, but he spent himself in the service of his Lord, and he would not have had it otherwise.

He died on 10th September 1951 in the sixty-ninth year of his age and the forty-sixth of his ministry.

Albert was born on 27 September 1882 at South Shields, Co. Durham. His parents were Henry, a horse-keeper and grocer (1901), and Eleanor.

The 1901 census describes Albert as a wagon greaser.