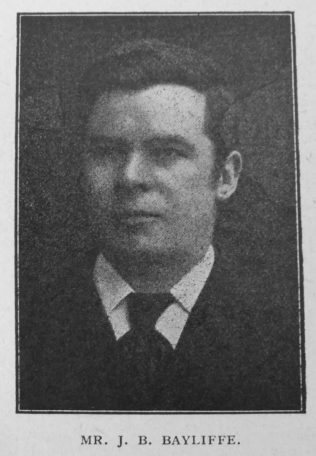 Born at Appleby in 1868. His grandfather on the maternal side and his father were Methodist pioneers in Westmorland. The evidence of pardoning love was given unto him very clearly when he was eleven years of age, and he had no doubt as to his acceptance by God.

He had an early conviction that God required his whole life and that he was called to be an evangelist. He sought Christian perfection and a life of perfect love. Nothing was allowed to stand in the way of the fulfilment of God’s will. His whole life was consecrated to the task of offering Christ to the people.

For eight years he served at the Star Hall, Manchester, built by Mr. Frank Crossley—industrialist and philanthropist—who said of him, ‘ Mr, Bayliffe is the only man I have known who grows more modest as he becomes more successful’.

The Primitive Methodist Conference appointed him a connexional evangelist, and he went up and down the country proclaiming the glorious gospel of the saving grace of God, and had the joy of leading hundreds of people to the Saviour.

He had something that gripped: a fund of humour that won a smile, a pathos that brought a tear, a passionate sincerity that made men listen, an experience that was attractive. When it was realized that his work was true to the genius of Methodism, he was ordained in 1917 a minister in full connexion, and the four circuits in which he travelled were greatly blessed by his ministrations.

He retained his enthusiasm for Christ and humanity to the end.

John was born in 1868 at Appleby, Westmorland, to parents Isaac, a railway porter (1871) and Margaret. He was baptised on 25 February 1868 at Brough, Westmorland.

Note: George D Rochester was Professor of Physics at Durham University when I (Geoff Dickinson) went to Durham to study physics in 1969. He was known for having co-discovered, with Sir Clifford Charles Butler, a sub-atomic particle called the kaon. George and Ida were regular worshippers at Elvet Methodist Church in Durham.