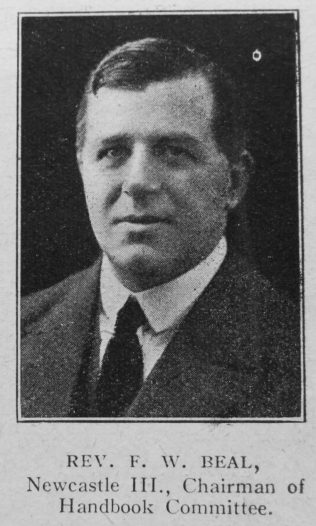 FREDERICK WILLIAM BEAL: born in Hull in 1880, he responded to the call to the Ministry when working as a qualified plumber in his father’s business. After training at Hartley College he served in the following circuits: Long Eaton, Nottingham II, Nuneaton, Newcastle upon Tyne I, Sunderland II, Aldershot C.F., Newcastle upon Tyne III, Leeds VIII, Ikeston, Stockton (Paradise Row) , Bradford (Woodhouse Grove), Hinckley (Albert Road), retiring and settling in Hinckley in 1948.

In all his circuits he was greatly beloved of his people and kept in touch with friends in them to the end of his life. He had a quiet gaiety about him that attracted young people many of whom in later years paid tribute to his influence upon them. His interest in young people earned him a place on the Board of Governors of the Hinckley Grammar School and Burbage Junior School. For years he was a member of Rotary and served a year as its President. During the First World War he worked as a rivetter in the Greenock shipyards during the week, returning to his circuit at the weekends. For three years he served as a Chaplain to the Forces and for many years as an officiating Chaplain to military and naval units. People came to him with their problems from all quarters, glad to avail themselves of his wise counsel and rich experience. He never sought the limelight but exercised his ministry amongst the ordinary people of his circuits and churches. Yet recognizing his administrative gifts the Bradford District nominated him Chairman, in which capacity he served with distinction. His preaching was of a high order and as a pastor he excelled.

His latter years were beset by failing health but his mind was always alert. He attended worship as long as he was able and was always a great encourager of his brethren. Always an avid reader, he built up a fine library, including modern works of theology and philosophy. This friendliest of ministers died in his sleep on the 18 May 1969, in the eighty-ninth year of his age and the sixty-fourth of his ministry.

Frederick was born on 25 October 1880 at Hull, Yorkshire, to parents John Beal, a plumber, and Maria Cawkill.

The 1901 census return identifies Frederick as an apprentice to a plumber, glazier & gas fitter.

He married Elsie Wakefield (abt1886-1954) in the summer of 1909 in the Shardlow Registration District, Derbyshire. Birth records identify one child.

Frederick died on 18 May 1969 at Leicester, Leicestershire.