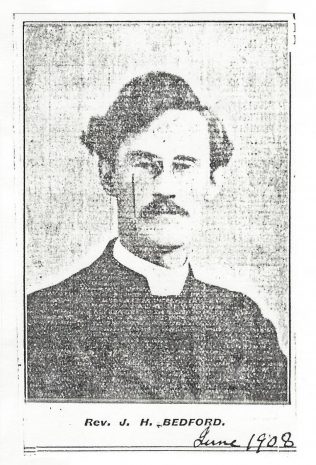 JOHN HENRY BEDFORD: born in Stafford in 1879. As a young local preacher he was greatly influenced by a sermon of Dr Jowett’s at Carr’s Lane, Birmingham. He left the teaching profession to train for the Primitive Methodist Ministry, and, after serving at Dawley and Malvern, he entered Hartley College. His studies there, especially under Dr A.S. Peake, remained a constant inspiration as he travelled in the circuits of Shieldmuir, Wrockwardine Wood, Cardiff, Pontypool, Brynmawr, Rhymney Valley, Portsmouth, Colne, Bournemouth, Woodfalls and, as an active supernumerary, Highcliffe-on-Sea.

His was an intensely pastoral ministry and much of it was spent in areas of deep need and poverty. He became Chairman of the South Wales District Synod and General Committee Delegate, as well as holding high office in the Christian Endeavour Movement and in Free Church Federal Councils. It is fair to say that he remained a Primitive Methodist at heart, cherishing all the evangelical and homely values of the fellowship which had nurtured him; but he was equally loyal to the united Church which he continued to serve with zeal and distinction. Indeed, two years before the uniting Conference, he pioneered a bold and vigorous new united church at Purbrook. He had close friendships with other churchmen and it was at the home of a distinguished Anglican that a party was held to celebrate his silver jubilee in the ministry.

Two other passions of John Bedford’s have been wonderfully fulfilled in the ministry of his sons: overseas missions and youth work. There is no more eloquent testimony to his ministry than the way it is being continued in his family. After the death of his wife, who for fifty-eight years had enriched and inspired his life and ministry, he came to live with his son Frank in Beckenham. His health was frail, but his spirit was as strong as ever. This was not the decline, but the quiet and triumphant fulfilment of a great ministry. With characteristic humility he would recall the first service he ever conducted: it was at Coton Clanford chapel when he was seventeen. ‘I gave out my text and repeated it several times, but no words could I formulate. Then I burst out crying and sat down, while the country folk joined me in weeping. Someone started singing and then they prayed for the boy who couldn’t preach.’ John Bedford’s whole life became eloquent of that Word whose service was his highest joy. He died on 10 August 1966, in the eighty-seventh year of his age and the sixty-second of his ministry.

John was born on 5 October 1879 at Stafford, Staffordshire, to parents Moses, a stamper at post office (1891), and Jane.

He married Lucy Augusta Callear (1880-1966) in the summer of 1908 in the Madeley Registration District, Shropshire. Census and birth returns identify two children.

Note: I have found no evidence in the Minutes of Conference of John being stationed at Dawley and Malvern before he went to Hartley College. It is likely that he served in those circuits as a hired local preacher.