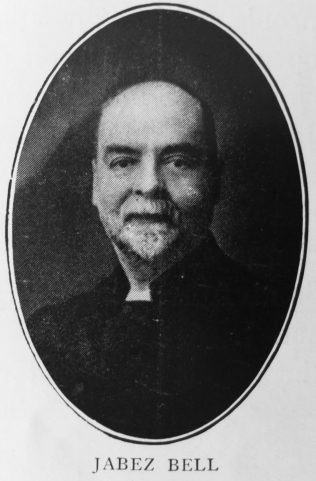 JABEZ BELL: born at Leicester in 1858. In 1879 he began a ministry which lasted till 1930, including twelve years given to West Africa, where he did yeoman service. At home, too, his memory will long be cherished in the circuits which had the privilege of his ministry.

Jabez Bell was cast in a mould of his own. He had strong religious and social convictions which he never hesitated to express, but even those who sometimes felt bound to differ from him were disarmed by the deep sincerity of the man and by the pawky humour which lighted up everything he said. Moreover, his kindliness of disposition and his unsparing devotion to his work won for him both the admiration and affection of all who knew him. His years of retirement were saddened by the passing of his devoted wife and of his two lovely and gifted daughters. His soul, though sorely stricken, kept the radiance of its faith. He passed on to the homeland on September 26, 1941, after a life nobly lived and work faithfully done.

Jabez was born on 15 October 1858 at Leicester, Leicestershire, to parents Henry, a bricklayer and grocer, and Catherine.