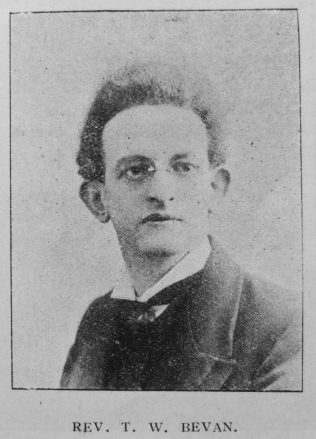 Thomas William Bevan: born in Spennymoor, County Durham, on 3rd May 1893. His parents died before he was five, and he was brought up, in a miner’s home, by his married sister. After working as a telegraph-boy and in the local Co-operative Stores, he was accepted for the Primitive Methodist ministry, and was sent to Hartley College, after a pre-collegiate year in the Dalton and Millom Circuit.

He was a passionate advocate of the social and political outworkings of the faith as well as a convinced pacifist and a sturdy Free Churchman. On these and other lines, he often spoke in the Methodist Conference, and not seldom aroused considerable disagreement. He was, however, always heard with respect and affection, not least by those who did not share his opinions. In 1962 he became an active supernumerary in the West Wight Circuit, where he continued to be the stimulating influence he had always been.

Finally, in 1965, he and his wife, who had shared wholeheartedly in all his ministry, retired to Liphook where for a further nine years he continued to preach, rendering especial help during a long period of ministerial illness. He regularly attended the Preachers’ Meeting, and also the local Fellowship of the Kingdom Group, and in both places he continued almost to the end, pleading constantly for a closer attention to the task of Christian apologetics. Scholar, prophet, evangelist and pastor, man of God and beloved friend; that was Tom Bevan all his days. Almost his last words were the singing of God’s praise, before he died, on 12th May 1976 in the eighty-fourth year of his age and the fifty-ninth year of his ministry.

Thomas was born on 3 May 1893 at Spennymoor, Co. Durham, to parents Isaac and Eliza.

The 1911 census describe him as a store assistant.

He married Agnes Stewart Smith (1898-1990) in early 1926 in the Todmorden Registration District, Yorkshire. The 1933 Methodist Who’s Who records that they had two daughters.