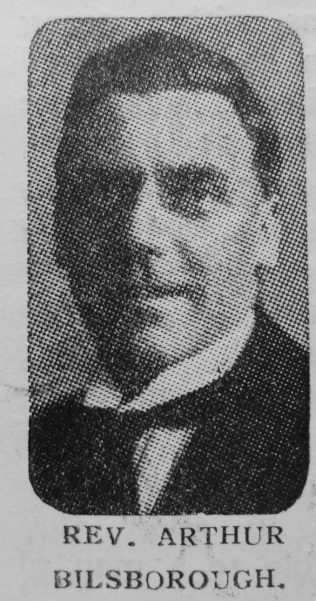 ARTHUR BILSBOROUGH, M.M.: born near Skipton in 1892 and brought up in a working class home in that town. He left school at twelve years of age and after working for a year in a newsagent’s shop went into the mill and became a weaver, working ten hours a day. In his early adolescence he responded to the call of Christ and became a Sunday school teacher and then a local preacher in the Primitive Methodist Church. When the call to the ministry came he managed to do his studying after working a long day in the factory.

He was accepted in 1914 and entered Hartley College. In his second year, along with other students, he joined the R.A.M.C, and was attached to the 135th Field Ambulance. In March, 1918 he was awarded the Military Medal for bringing in wounded under heavy shell fire.

After demobilisation he returned to Hartley and was ordained in 1920 and appointed to Bradford (Great Horton). His subsequent ministry was spent in the north of England. Leaving Bradford he served in Leeds (Armley), where he became Prison Chaplain, Halifax (Fairfield), Huddersfield (Lindley), Preston (Trinity) and Brighouse. While at Huddersfield he was appointed Chairman of the Halifax and Huddersfield District. He superannuated in 1956 and spent his retirement in Preston and Blackpool.

He was of a genial disposition and found it easy to make friends. His own upbringing and experience gave him a deep understanding of the needs and outlook of men in the industrial north, where his ministry will long be remembered. He died suddenly on 23rd February, 1974 in the eighty-third year of his life and the fifty-eighth year of his ministry.

Arthur was born on 21 September 1892 at Carleton, nr Skipton, Yorkshire, to parents Thomas, a fitter’s labourer (1901), and Annie.

He married Beatrice E Shepherd (1891-1965) in the spring of 1920 in the Skipton Registration District, Yorkshire.