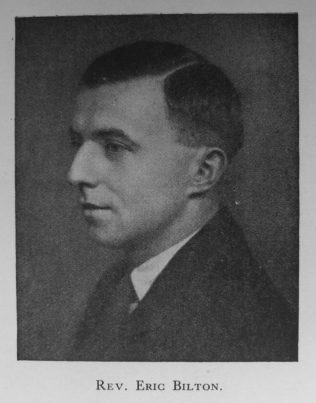 ERIC BILTON: born at Scotter, Lincolnshire on Sth June 1907. A son of the manse, he received an early call to the ministry, being the youngest man in Hartley College when he entered at the age of nineteen. To all of his appointments he brought an outstanding contribution of leadership and thought. He served in the following circuits: Upton Park, London (Stoke Newington), London (Willesden Green), London (Forest Gate), Wolverton and Bletchley, Cross Hills, Silsden and Cowling, Bradford (Central Hall), Wednesbury Mission, Great Yarmouth (Central Mission) Great Yarmouth and Gorleston, Darlington and Preston (Lune Street).

During his stay in London he was for a time secretary of the Methodist Peace Fellowship and while he did not waver in his pacifist convictions, many young men were grateful for the support he gave as they reached their own different conscientious opinions. After the war he served in central churches where he welcomed and accepted as a challenge to his intellectual and spiritual life the unique preaching opportunities. He read widely, keeping abreast of the thought and movements of the time, and was thus always able to preach a relevant word to his people as well as finding ways to express his social and evangelical zeal. Cheerful in his approach, immaculate in his appearance, his whole bearing was an indication of an inner joy and discipline which marked his life, giving order and purpose to all his activities.

He was a man of great integrity and strong conviction, who sought neither honour nor praise for himself and who never attempted to force his opinions onto others. He was a wise counsellor in the affairs of the church and a patient listener to those who sought his advice and help. In retirement, though not always in good health, he continued to preach regularly and share in the life of the churches at Lowestoft, especially at Southwold where for a year he undertook pastoral responsibility. Thoughout his ministry he was wonderfully supported by his wife Dorothy and felt himself greatly blessed by the love of three daughters and their families. He died on 26th January 1979 in the seventy-second year of his age and the fiftieth year of his ministry.

Eric was born on 5 June 1907 at Scotter, Lincolnshire, to parents Joseph Bilton, a PM minister, and Annie Elise Burnett

He married Dorothy Mabel Muskett (1904-1991) in the summer of 1933 in the Kingston Registration District, Surrey. Birth records identify three daughters.