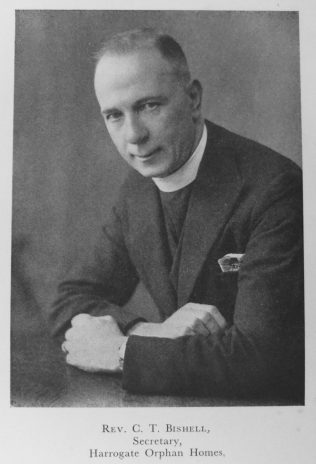 CHARLES THOMAS BISHELL: born at Lincoln in 1879. On completing his college course at Hartley in 1903 he travelled in the following circuits: Stalybridge, Bollington, Leeds, Bridlington, Scarborough, Church Gresley, and Leeds. Every inch the Christian gentleman, after more than forty years his name remains fragrant in the memories of those to whom he ministered in his early circuits. During the first World War he served with the Middle East Forces as a commissioned chaplain.

It was a very great blow to him when his son, Stuart, was lost on active service with the Royal Air Force in the second World War. This wound went very deep and it hurt to the end of his life. With courage, and devotion to his Lord, he made this challenge a means of spiritual discipline and enrichment to himself. To many of his fellows he made what might have been a lonely road companionable.

Besides his circuit work, he served his Church for a period as secretary of the Harrogate branch of the N.C.H.O., and as a member of the Committee of the Chapel Aid Association, acting for a time as vice-chairman. Up to within a very short time of his death he was serving as chaplain to the Scarborough Hospital. To share the hospitality of his home and to have but a glimpse into the love, devotion, and faith which governed his family life was to have an unforgettable and treasured experience. He died on 25 August 1958, in the eightieth year of his age and the fifty-fifth of his ministry.

Charles was a teacher before he entered the ministry.

He married Beatrice Jane Fell (1885-1971) in the spring of 1908 at Scarborough, Yorkshire. Records identify two children.