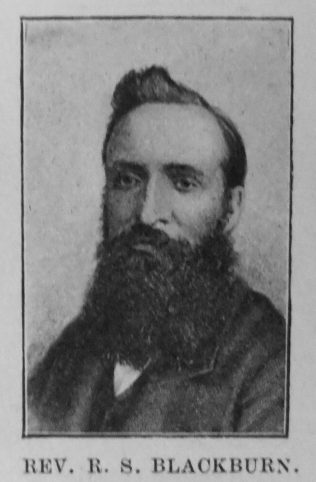 THE subject of these lines was born at Pontefract, on November 5, 1850, and closed his earthly life on April 22, 1879, at the George’s Bay Mission Station, Fernando Po, West Africa. The religious associations of his early life seem to have been of a healthy character. He attended the Wesleyan Methodist Sunday-school, and in his sixteenth year he realized the joy of sin forgiven. From that time commenced a career of Christian service signally devoted and active, marked by an ever-increasing fruitfulness as his talents developed themselves and his consecration became more complete, and culminating in the sublime surrender of self on the altar of Christian missions. Having been born again, he aimed resolutely at growth in grace; and hence his observance of the means of grace was regular, appreciative, and devout. He realized the responsibilities as well as the privileges cf the new life, and ardently entered on every scheme of practical philanthropy that came in his way, being especially diligent in tract distribution, visitation of the sick, and the various departments of the Temperance movement, for reasons satisfactory to himself.

About his twentieth year he transferred his membership from Wesleyan Methodism to the Primitive Methodist Connexion. Among his new associates he soon became greatly esteemed and extensively useful. He was put on the preachers’ plan, and laboured assiduously jn preparing for and performing the Important work of preaching the gospel. He became moreover an enthusiastic home missionary. ‘Going to his appointments did not simply mean preaching in the place provided, to whomsoever would come and hear him; it meant going out into the highways and hedges, and compelling people to come in. During the intervals of service he was accustomed to visit from house to house, speak a cheery word of invitation, and leave a silent messenger of mercy. He would often take his stand on some village green, or doorstep, and cast the seed of life upon the waters. He was specially at home in these effective methods of reaching the masses.’

In 1875 he was called to the ministry; and after severe heart-searchings and earnest prayer, he responded to the call. He cheerfully surrendered commercial prospects of no ordinary character, to become a Methodist preacher, and was appointed to the Bingley Circuit. For the work of a Primitive Methodist minister, he had exceptional qualifications. His robust frame, frank and open countenance, manly bearing; and excellent voice; his general intelligence, and observant mind; his power of adapting himself to circumstances; his unmistakable earnestness in Christian work, coupled with a singularly kind and sympathetic nature; his enthusiasm for open-air preaching, house to house visitation, and evening classes for the mental and moral culture of the young; his open-handed generosity and constant activity in doing good; with the ardour and plodding energy he threw into his work, combined to make him a more than ordinarily efficient agent in evangelistic work. For three years he toiled energetically in the Bingley Circuit, and such was the regard for his character and appreciation of his services entertained by the officials and congregations of that station, that he was urgently desired to remain a fourth year, and thus complete his probation in the circuit in which it had begun. The Connexional authorities sanctioned this arrangement; but a vacancy having occurred on the Fernando Po Missions, he gratified a wish cherished for many years, by volunteering for service there. His offer was accepted, he set sail from his native shores on August 10, 1878, amidst the fervent prayers of his friends, who augured for him a bright and successful career as a missionary to the heathen. But alas! such hopes were doomed to disappointment. For only eight months was he permitted to toil on the Island to which he had gone; when he succumbed to the trying climate and the varied and heavy work he undertook. He died, far away from ‘kith or kin,’ in the presence of a few of the members of the infant church, but in calm trust in the Saviour he had gone to preach to others, and in sure and certain hope of a resurrection to eternal life. The immediate cause of his death was brain fever. He passed away on the evening of April 22, 1879, and through the livelong night the few faithful ones watched by his mortai remains, and with the returning light, conveyed him to Santa Isabel for interment. There they were consigned to the grave, amid the tears of a bereaved church and a sympathetic populace.

A singularly touching incident occurred in connection with this event. Mr. Blackburn went to Africa unmarried. For some years he had been engaged to a devoted and gifted young lady, in every way worthy of him. As the way was not open for their marriage at the time of his departure, it was arranged that she should follow him. On April 26, 1879, she started from Liverpool to join him in his African home, in total ignorance of the dreadful fact that four days previously he had entered into rest. She had accomplished about three-fourths of the voyage, when a homeward-bound vessel conveyed the sad intelligence, that ‘he who had waited so long in patient and loving trust for her companionship, no longer needed her.’ She immediately returned home, stricken indeed, but trustful still in the love and power of an Almighty Father.

Richard was born in November 1850 at Pontefract, Yorkshire to parents Richard Stead Blackburn, a tin plate worker (1851), and Harriet Rigg.

The 1871 census return describes Richard as a book-keeper and shop assistant. At that time his father was an ironmonger and general dealer.